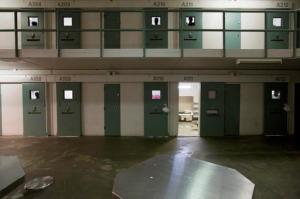 FILE – This Sept. 2, 2015 file photo shows the the door to the cell at Hampton Roads Regional Jail in Portsmouth, Va., where 24-year-old Jamycheal Mitchell was found dead Aug. 19, 2015. A year after the death of the mentally ill Virginia inmate, questions remain about how the otherwise healthy man deteriorated in plain sight of jail and health officials. In June 2016, Virginia State Police announced a criminal investigation into the matter. (Bill Tiernan/The Virginian-Pilot via AP, File)

PORTSMOUTH, Va. (AP) — One year later, many questions loom about how a mentally ill man accused of stealing $5 worth of junk food died behind bars in Virginia. Security footage retained by the jail is unlikely to provide answers.

The Hampton Roads Regional Jail allowed an Associated Press reporter on Thursday to watch footage captured outside the cell where Jamycheal Mitchell died last August. But the video shows only 11 ½ hours, including the time leading to jail officials’ realization that something was wrong with the 24-year-old and their response.

It is unclear whether any previous footage remains intact. And the footage viewed by a reporter fails to answer key questions about Mitchell’s treatment, including whether he was being fed and checked on regularly by medical staff.

Mitchell was jailed in April 2015 on charges he stole a Mountain Dew, a Snickers bar and a Zebra Cake from a 7-Eleven in Portsmouth. He was ordered to a state mental hospital, but his paperwork was stuffed in a hospital employee’s desk drawer and he was never sent there. He died about four months later of heart failure accompanied by severe weight loss, a medical examiner said.

Mitchell’s family filed a $60 million lawsuit accusing jail officials of physically abusing Mitchell and withholding food. The jail has said officials never mistreated or ignored Mitchell, claiming he was offered nearly 300 meals during his stay and received all but three meal trays because he refused them.

Advocates have hoped Mitchell’s death will spur much-needed change in Virginia, which lags behind much of the country in general-fund spending on behavioral health care.

The Portsmouth NAACP has called on officials to release the video, saying in a recent statement that the jail’s refusal “just further heightens the level of distrust and frustration.”

Mark Krudys, an attorney for Mitchell’s family, said he couldn’t comment on the video because neither he nor the family has seen it. But he criticized the jail for not preserving more of the footage, noting he asked Superintendent David Simons in a letter last September to preserve all video and other records concerning Mitchell.

“The failure to preserve the videotape evidence — evidence that the family requested in writing be preserved — is very troubling,” Krudys said Friday. He said Mitchell’s family and others will hold a vigil outside the jail Friday evening to mark the one-year anniversary of his death.

Officials at the Hampton Roads Regional Jail initially said the footage captured outside Mitchell’s cell had been recorded over. The jail recently changed course in court documents, but didn’t say how much video was retained and refused to provide a copy to media outlets, including the AP. Simons allowed an AP reporter to view the roughly 11 1/2 hour video at the facility, but he refused to discuss it.

The video, which is blurry and difficult to see clearly, begins at 11 p.m. on Aug. 18, 2015. At several points during the night, a trainee and jail officer walk through the unit, passing by Mitchell’s cell, which has a steel door and small window. Around 4 a.m. Aug. 19, the lights in the cells go on.

A half hour later, inmates begin passing out breakfast through the small slots in the cell doors. Around 4:45 a.m., what appear to be several jail officers gather around Mitchell’s cell and peer through the window. Shortly afterward, they enter the cell. Minutes later, medical staff arrives, followed by paramedics. The paramedics leave without Mitchell.

Around 5:10 a.m., medical staff and jail officers leave the cell and disappear from view. Mitchell’s body remains in the cell until shortly after 9 a.m., when it’s placed on a gurney, covered by what appears to be a blue blanket and is wheeled away.

Simons said he could not discuss why the jail initially said the footage was recorded over or why it didn’t retain more footage. A jail official told The Richmond Times Dispatch in May that it only saves video “when there’s something significant we need to review.” Jeff Rosen, an attorney for the jail, didn’t immediately return a message left at his office on Friday.

Follow Alanna Durkin Richer on Twitter at https://twitter.com/aedurkinricher. Her work can be found at http://bigstory.ap.org/journalist/alanna-durkin-richer.
Copyright 2016 The Associated Press. All rights reserved. This material may not be published, broadcast, rewritten or redistributed.