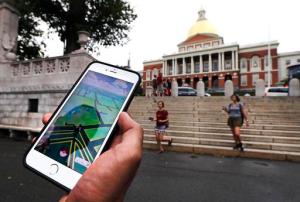 In this Monday, July 18, 2016, photo, a “Pokemon Go” player shows his mobile phone while walking through the Boston Common, outside the Massachusetts Statehouse in Boston. Historical markers dot the landscape of old cities, barely noticed by passers-by. The founder of the volunteer-based historical markers website that licensed its data to game-maker Niantic Labs five years ago said he hopes enough people take their eyes off the Pokemon they’re trying to catch to read the history on the markers. On the opposite side of the wall, left, is a bronze memorial to Robert Gould Shaw and the 54th Regiment Massachusetts Volunteer Infantry, comprised of black Union soldiers who fought in the Civil War. (AP Photo/Charles Krupa)

Some don’t bother to linger at these Pokestops, staying just long enough to stock up on the virtual balls they’ll use to bonk and capture the next Pokemon. But for others, the GPS-powered “augmented reality” game is heightening awareness of the history and geography of their neighborhoods.

“Before I was just going from Point A to Point B, but now I’m learning things,” said 15-year-old Jaiden Cruz as he walked by a plaque Wednesday in downtown Providence, Rhode Island, marking where Abraham Lincoln spoke at an old railroad hall in 1860. The plaque is a Pokestop, and shortly before Cruz arrived, another player dropped a “lure module” that attracts Pokemon to the site.

The 380-year-old city abounds with Pokestops, including the nation’s oldest Baptist church — founded by religious dissident Roger Williams in 1638 — and a stone marking where French troops camped during the Revolutionary War.

“It gets you to learn about your surroundings,” said 59-year-old Cheryl DiMarzio, who on the advice of her daughter ventured into an urban park to capture an owl-like Pidgey and some purple rodent Rattatas. “Different landmarks, the statues and historical places.”

How such markers became the backbone of the wildly popular video game that launched this month is a story that goes back at least five years, when tech giant Google signed a licensing agreement to use The Historical Marker Database , a volunteer-run website that has tracked the geographic coordinates of more than 80,000 historical markers around the world, most of them in the United States.

J.J. Prats, founder and publisher of the Virginia-based marker database, said many but not all the Pokestops and Pokemon gyms — where players send their creatures into battle — are from his website. He’s thrilled.

“Hopefully people will take their eyes off the phone and read the historical markers,” Prats said.

The game has delighted Anthony Golding, a middle school history teacher in Tupelo, Mississippi, who is looking forward to incorporating Pokestops into his curriculum in the fall.

He has replenished his Pokemon wares where the Civil War’s Battle of Tupelo was fought, at monuments to Civil Rights Movement figures, and at a pedestal that holds the Tupelo Meteorite. But Elvis Presley holds the monopoly on Tupelo’s Pokestops, from his birthplace to the Main Street store where he got his first guitar .

“Pretty much every Elvis landmark has a Pokestop devoted to it,” Golding said.

Prats said his website’s views have quadrupled since the game launched , possibly because gamers are looking to get ahead and find new stops. His editors in recent days have had to strike down a rash of “bogus” submissions for markers that have no historical significance but that he suspects might be near where players live or where businesses are hoping for foot traffic , he said.

Game maker Niantic Labs , which began as an internal Google startup, originally used the markers for its earlier game, Ingress, which attracted a smaller but dedicated community when it launched in 2012. Niantic, which spun off from Google last year, did not respond to emails seeking comment about its “Pokemon Go” locations.

But the Ingress website gives clues about how the Pokestops were created. Before closing off submissions, Ingress invited its users to identify new locations for “portals,” real-life places of cultural significance that gamers try to capture and connect on the Ingress app.

The company sought spots “with a cool story, a place in history or educational value” or a “cool piece of art or unique architecture.” It prized libraries and little-known gems, and welcomed places of worship because they are “a nod to the otherworldly” that amplified the game’s mysterious tone.

Ingress player John Jannotti, who teaches computer science at Brown University, said he began stumbling upon the hidden history of his Providence neighborhood, including obscure stone markers showing the location of race riots where white mobs attacked black residents in the early 19th century. He even submitted some portals of his own.

Now, those markers are Pokestops attracting a whole new community.

Golding, the teacher, said he frequently runs into his students in downtown Tupelo while playing the game.

“It’s probably more about the game for them right now,” Golding said. “After the newness kind of wears off, we can start to have those conversations about the historical significance behind those Pokestops.”
Copyright 2016 The Associated Press. All rights reserved. This material may not be published, broadcast, rewritten or redistributed.