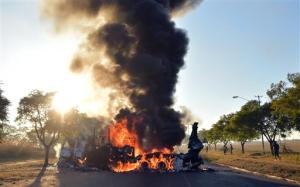 JOHANNESBURG (AP) — South African rioters blocked roads, looted shops and burned vehicles on Tuesday June 14th in several areas of the country’s capital, Pretoria, in a show of anger over the selection of the ruling party’s mayoral candidate ahead of local elections.

The violence raised concerns about security ahead of the Aug. 3 elections in South Africa, where periodic unrest over the lack of basic municipal services already stretches police in many poor communities. In the past year, violence and vandalism have also hit some universities and other schools as students protest high fees and voice other grievances.

The unrest in Pretoria began Monday June 13th and affected several poor areas on the periphery of the city, including Mamelodi and Atteridgeville. Mamelodi resident Lucky Pule said people burning vehicles tried to stop others from filming it with their mobile phones. He described a chaotic scene.

“I was scared, especially when the other bus’s diesel tank started exploding. It exploded and then the fire was all over the place,” Pule told an Associated Press videographer.

Nineteen buses were burned in Mamelodi, the transport ministry said.

“These actions paint a negative picture of our country and makes it a mockery in the eyes of the nation,” the ministry said in a statement.

Rioters stoned some emergency vehicles, and ambulances were unable to reach sick patients in some areas, reported the African News Agency, a South Africa-based media outlet. Authorities closed a section of a major highway north of Pretoria because of the violence.

The South African government appealed for dialogue and condemned the violence, saying in a statement: “Perpetrators will face the full might of the law.”

There were no immediate reports of casualties or arrests.

Pretoria is home to government ministries and foreign embassies.

Some residents said they had not been adequately consulted over the selection of Thoko Didiza, a former Cabinet minister from the coastal city of Durban, as mayoral candidate for the African National Congress in local elections. They want incumbent Kgosientso Ramokgopa to stay, though Ramokgopa has backed Didiza as his replacement, according to the African News Agency.

Additionally, the ruling party has been under strain because of corruption allegations against President Jacob Zuma, who was instructed by the Constitutional Court to reimburse the state for a portion of more than $20 million in state spending on his private home. Many South Africans are also unsettled over allegations that a wealthy business family, the Guptas, has influenced some of Zuma’s Cabinet picks, though the president denies any inappropriate conduct.