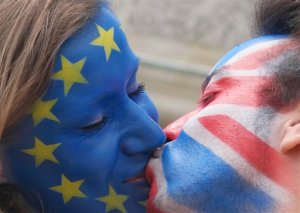 Young people kiss each other at Brandenburg Gate in Berlin, Germany, Sunday June 19, 2016 to support the ‘ Remain’ voters in Britain’s referendum. The campaign in the referendum over Britain’s future in the European Union is about to resume full throttle after being on hold due to the killing of a popular lawmaker. British voters head to the polls on Thursday to decide if the country should stay in the European Union or leave it. (Joerg Carstensen/dpa via AP)

LONDON (AP) — The Latest ahead of Britain’s referendum on continued membership in the European Union (all times local):

European Union President Donald Tusk says whatever the result in Thursday’s referendum vote, the member nations must fundamentally reassess the future since dissatisfaction is growing all over the continent.

Tusk said in Lisbon on Monday, June 20, 2016 that “whatever its result is going to be, we must take a long, hard look on the future.”

Even if Britain votes on Thursday, June 16, 2016 to stay in the union, “we would be foolish if we ignored such a warning signal as the UK referendum.”

Even in founder nations like the Netherlands and France, anti-EU groups are gaining in strength from year to year and in new eastern members like Poland and Hungary, the anti-EU streak has also been increasing.

“There are more signals of dissatisfaction with the Union coming from all of Europe, not only from the UK,” said Tusk.

European Union heavyweights Germany and France hope that U.K. citizens will vote this week to stay in the EU, saying the bloc would be poorer without Britain.

German Foreign Minister Frank-Walter Steinmeier said Monday that Europe would “lose more than just a country. We would be losing the history and traditions of Great Britain in the European Union.”

He said that “Europe would be much poorer if Britain leaves.”

His French counterpart, Jean-Marc Ayrault, said that “the choice the British people make will be important for them, but also for Europe.”

He told reporters at an EU foreign ministers’ meeting in Luxembourg that “all Europeans are looking to the British people, because we have – history reminds us – a long life in common.”

But the Social Democratic leader says there’s no reason to panic.

“We don’t know exactly which effects and which forces could be triggered in Europe,” Lofven told Swedish news agency TT on Monday. “But it doesn’t mean any collapse, panic or chaos in Sweden. We will manage.”

He said his government is working on a plan for how to respond, whether the “leave” side or the “remain” side wins the June 23 referendum.

The pound and global stock markets are surging as both opinion polls and betting markets suggest an increase in support for Britain to remain in the European Union.

The pound rose 1.8 percent to $1.4619 Monday, rebounding from last week, when it hit its lowest levels since April.

The first opinion polls since the slaying of pro-Europe lawmaker Jo Cox suggest that the “remain” camp has benefited from a two-day suspension in campaigning following her death.

In stock markets, the FTSE 100 was up 2.6 percent and other indexes around the world were just a buoyant, with Germany’s DAX 3.1 percent higher.

Opinion polls are now back to even, though the shifts are very small from earlier polls last week leaning to exit.

Betting market Betfair says the probability of “remain” has risen to 72 percent, from Friday’s 65 percent.

With an ABBA-esque appeal, Sweden’s biggest financial daily has joined the chorus of European newspapers urging Britons to remain in the European Union.

Monday’s front page of newspaper Dagens Industri was covered by a Union Jack and the bold headline “Take a Chance on EU,” a reference to one of the Swedish pop group’s greatest hits.

In the online edition, politics editor P.M. Nilsson lists things he believes Sweden and Britain have in common, from similar tastes in music to a belief in free trade and that “meetings should start on time.”

Nilsson wrote in English that “we are all like you — proud and headstrong with special relationships to each other. And we have a club. Don’t leave it.”

British Foreign Secretary Philip Hammond says “there will be no going back” if Britain decides to leave the European Union.

He said in Luxembourg on Monday that even if it would be possible to reapply for EU membership, the outcome of Thursday’s referendum will be an “irreversible decision.”

Hammond said ahead of an EU foreign ministers meeting that “Britain could never rejoin the European Union at a later date except on terms that would be unacceptable to it,” including membership of the euro currency and membership of the Schengen passport-free travel zone.

British Foreign Secretary Philip Hammond will be pressing his European Union counterparts to swiftly implement negotiated concessions in case Britain votes to remain in the bloc on Thursday.

Prime Minister David Cameron won a series of goodwill concessions in February on immigration, the euro and staying out of ever-closer union, moves he hopes will persuade Brits to remain in the EU.

Speaking before the start of an EU foreign ministers meeting in Luxembourg Monday, Hammond said Britons “will expect a speedy and complete implementation of the package that was agreed in February” if they vote to stay in the 28-nation bloc.

He added Brussels needs “to make sure that the EU works for all its people going forward and addresses the concerns of ordinary people.”

EU President Donald Tusk has promised that the concessions would be implemented in “less than one year.”

Sayeeda Warsi said Monday that moderate voices in the “leave” campaign have been drowned out.

Warsi is one of the most prominent Muslim politicians in Britain. She said her decision was sparked by a poster depicting a crowd of migrants walking through Europe with a warning in capital letters that said: BREAKING POINT.

Warsi told the BBC that “this kind of nudge-nudge, wink-wink xenophobic racist campaign may be politically savvy or politically useful in the short term, but it causes long-term damage to communities.”

Campaigners for “leave” were bemused by her decision, saying they weren’t even aware she had been a supporter.