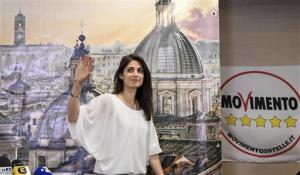 ROME (AP) — An anti-establishment party founded by a comic has triumphed in Italian mayoral runoff elections, trouncing Premier Matteo Renzi’s candidates in Rome and another key city and turning its sights Monday, June 20,2016 toward its next goal — national power.

The 5-Star Movement candidate in Rome, Virginia Raggi, a lawyer with a three-year stint as a city councilwoman, took 67.2 percent of the vote in a two-person runoff Sunday, becoming the corruption-stained capital city’s first female mayor and, at 37, also its youngest.

Raggi promised to work to bring “legality and transparency” to Rome’s City Hall, where prosecutors probing widespread corruption have found many municipal contracts were awarded without taking bids to political cronies and even a Mafia-like clique.

Another 5-Star candidate, Chiara Appendino, also a woman and even younger at 32, scored in Turin what could be the bigger embarrassment for Renzi, who also serves as Democratic Party leader. With 54.6 percent of the vote, Appendino defeated Mayor Piero Fassino, a veteran Democrat.

The Democratic Party has been weakened by defections and the Rome scandals, which tainted local Democrats as well as conservative politicians. Many Democrats chafe at what they see as Renzi’s brash management style bordering on arrogance.

Renzi didn’t immediately comment. But while campaigning for Democrats in the weeks before the runoffs, the premier sought to brush off any reading that the outcome would be a judgment of his two years at the helm of a center-left coalition that has been marred by infighting.

National elections are due in early 2018, although Renzi has promised to resign if a referendum this fall fails to confirm reforms aimed at streamlining Parliament and the lawmaking progress.

The premier’s only big consolation prize came in Milan, where his candidate Giuseppe Sala, who successfully managed that city’s recent Expo, took 51.7 percent of the vote to defeat another respected manager, Stefano Parisi, who was backed by center-right forces. In much smaller Bologna, a center-left incumbent mayor backed by the Democrats defeated a center-right rival.

The defeat of Raggi’s opponent in Rome, Democrat Roberto Giachetti, was widely expected, given deep anger over years of City Hall corruption. Investigations have led to arrests of dozens of politicians and their cronies, including Democrats as well as right-wing proponents, whose candidate failed to make into the runoff. Deteriorating public services like mass transit and garbage collection also fueled voter determination to toss out the old guard.

The 5-Star Movement’s leap in popularity is remarkable, considering its short life. Comic Beppe Grillo, using his widely popular sarcastic blog chastising traditional politicians as a springboard, converted the momentum into a party less than a decade ago. The first significant mayoral victory came in 2012, in the affluent northern town of Parma.

Mobbed by reporters Monday, Grillo recalled how detractors doubted the movement would take off in politics. “The ‘mission impossible’ airplane has taken off and we’ll gain altitude,” Grillo said.

The Italian news agency ANSA quoted him as saying “we’re flying high toward the national government.” But when reporters asked whether he aims to land a 5-Star politician in the premier’s office, he sidestepped those questions.

While the 5-Stars boast they run for office without making political alliances, it was unclear how much their victories Sunday received unsolicited help from other parties. In some cities, right-wing parties shut out of the runoffs urged their followers to vote for 5-Star candidates to ensure the defeat of Renzi’s forces.

Grillo himself cannot hold public office due to a manslaughter conviction stemming from a 1981 car accident.

Luigi Di Maio, a 5-Star lawmaker who is vice-president of the lower Chamber of Deputies, contended the runoff victories showed his party is “the only credible force” that can defeat Renzi’s Democrats nationally.

How the 5-Star Movement can convert its reputation as an anti-establishment, protest force into significant power-holding will be closely observed.

The new 5-Star mayors “will have to find alliances at the local level and finally leave the ambiguity that has characterized their proposed policies at a national level,” economist Lorenzo Codogno, an analyst and visiting professor at the European Institute at the London School of Economics and Political Science, wrote in an emailed comment.

Raggi’s commanding victory in Rome also reverberated in the sports world. Citing the capital’s infestation by corruption, she has cast doubt on the wisdom of Rome’s bid to host the 2024 Olympics, an opportunity Renzi has touted as good for Italy’s economy. If the new mayor nixes the candidacy, that would effectively doom the bid’s shot at success.