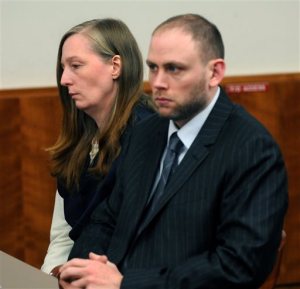 FILE – In this March 5, 2009, file photo, Stacey Castor, left, and her attorney Charles Keller listen in Syracuse, N.Y., as Onondaga County Judge Joseph Fahey addresses her before pronouncing her sentence for the murder of her husband David Castor in August of 2005. Castor, convicted of fatally poisoning her husband with antifreeze and trying to kill her daughter and frame her for the crime has died in prison, Saturday, June 11, 2016. (John Berry/The Syracuse Newspapers via AP, File) NO SALES; MANDATORY CREDIT

SYRACUSE, N.Y. (AP) — A New York woman convicted of fatally poisoning her husband with antifreeze and trying to kill her daughter in similar fashion has died in prison.

Castor was convicted in 2009 of killing David Castor and trying to kill daughter Ashley Wallace with pills and alcohol as part of a plot to frame her for the murder.

Castor was also convicted of filing a fake will to inherit her second husband’s estate and was suspected of fatally poisoning her first husband in 2000.

The case was featured on an episode of “Forensic Files.”

Copyright 2016 The Associated Press. All rights reserved. This material may not be published, broadcast, rewritten or redistributed