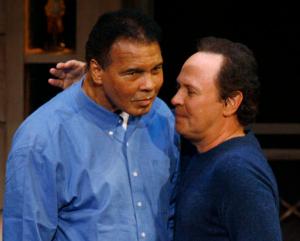 FILE – In this Jan. 17, 2007, file photo, Billy Crystal, right, hugs boxing legend Muhammad Ali and honors him on his 65th birthday during intermission of Crystal’s show “700 Sundays” in Tempe, Ariz. Long before movie stardom, Crystal was still a relative unknown in the early 1970s when he was picked as part of a dais that would help roast Ali at a banquet. Crystal’s Ali routine–he also mimicked longtime Ali foil Howard Cosell–would become a part of his act for the rest of his career. (AP Photo/Ross D. Franklin, File)

Billy Crystal is ready to go one final round with friend and foil Muhammad Ali.

Often imitated? That was Ali. His boisterous voice roared for decades, he would boast he was The Greatest, before it turned soft, raspy and silent as he battled Parkinson’s.

Ali in his heyday was ripe for impression — and comics and sketch comedy shows all took aim at the champ.

Long before movie stardom, Crystal was still a relative unknown in the early 1970s when he was picked as part of a dais that would help roast Ali at a banquet. Crystal’s Ali routine — he also mimicked longtime Ali foil Howard Cosell — would become a part of his act for the rest of his career.

Crystal is among the mourners scheduled to speak Friday at Ali’s funeral. President Bill Clinton will deliver a eulogy.

It’s easy to imagine Crystal will break out bits of his old routine and make an arena full of fans, friends and family feel for a moment that Ali is talking to them one more time. Ali’s voice had been diminished for so long, that it was often modern-day artists who would introduce a new generation of fans to the boxer’s quotes and quips through comedy.

Crystal remembered Ali last week on Twitter with a video of his 1979 performance called “15 Rounds ,” with the caption, “For the greatest man I have ever known.”

Crystal’s nearly 12-minute performance at Ali’s 1979 retirement tribute show at the Great Western Forum captures both at their best: Crystal breaks out his impeccable Ali (“I’m so fast, I can play pingpong by myself”); The Greatest can’t stop laughing and later rises for a standing ovation.

Here are some of the memorable impressions of the wannabe Greatests:

Ali was ready to spar another round, this time in a verbal war of words at breakfast with roommate Katharine Hepburn.

“If you put another biscuit in my face, I’m going to knock you upside your head ! I am still the greatest of all time!”

Ok, this wasn’t the real-deal Ali but rather Crystal as he performed another spot-on impersonation of the former heavyweight champ (opposite Martin Short as Hepburn) in a 1980s “Saturday Night Live” skit.

Ali was occasional guest — when he wasn’t the subject of a roast — at Crystal’s touring shows.

Ali was a great sport when it came to his public persona, as well. Ali took the pokes and jabs with more ease than when he was in the ring from comedians like Crystal and various other TV shows and personalities who found Ali’s larger than life aura easy to duplicate on stage or screen.

Crystal and Ali forged a friendship that spanned 40 years. But in the battle of the one-liners over the course of their friendship, Crystal was the undisputed champ of comic relief.

“I’m announcing tonight that I’m changing my name again because I’ve got new religious beliefs,” Crystal said, as Ali, on a 1977 episode of “The Tonight Show.” ”From tonight on, I want to be known as Izzy Yiscowitz. I’m a Hasidic jew. Izzie Chaim Yiscowitz. That stands for Chaim the Greatest.”

Crystal also roasted Ali during a guest spot for the fighter’s 50th birthday celebration TV special. Check out this clip where Crystal talks about the fun of roasting his pal Ali.

Here’s a 1981 sketch with Joe Piscopo as a reporter interviewing a young Cassius Clay (played by Eddie Murphy) training for his latest fight:

“I’m going to retire from the boxing game healthy, happy, rich and pretty. I’m the greatest fighter of all times!!!” Murphy as Ali says pointing at the camera.

David Alan Grier did his best work as Ali on “In Living Color” when he played the befuddled champ in a spoof of the movie “Three Men and a Baby” called “Three Champs and a Little Lady.”

Grier played Ali (other actors played Mike Tyson and Sugar Ray Leonard) in the skit and has kept his impression part of his routine.

Skip to the 2:50 mark to hear Grier channel Ali on a radio show hosted by MTV News reporter Sway.

TYSON-ALI: It’s not quite an impersonation, but who can resist Mike Tyson recalling the time he told Ali he would avenge his defeat to Larry Holmes? Here’s Tyson on Conan O’Brien’s show .

This story has been corrected to show that David Grier’s middle name is Alan, not Allen.