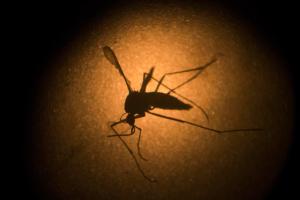 FILE – In this Jan. 27, 2016, file photo, an Aedes aegypti mosquito is photographed through a microscope at the Fiocruz institute in Recife, Pernambuco state, Brazil. The number of pregnant women in the United States infected with Zika virus is suddenly tripling, due to a change in how the government is counting cases. In a change announced Friday, May 20, 2016, the Centers for Disease Control and Prevention will count all women who tested positive, regardless of whether they had suffered symptoms. (AP Photo/Felipe Dana, File)

RICHMOND, Va. (AP) — With the summer mosquito season fast approaching and anxiety about the Zika virus growing, Virginia officials are racing to educate the public and distribute 10,000 Zika prevention kits to pregnant women.

The kits, which will be provided through health care providers, include a small bottle of mosquito repellent, educational materials, and condoms. That’s because the disease can be spread sexually as well as by bites from the mosquitoes that carry the virus.

And because Virginia isn’t known for its tropical diseases, the state is ramping up its capacity to respond to the virus, getting the state lab ready to test samples and preparing plans to assist dozens of communities across Virginia with mosquito control.

“At the end of the day we are not Florida, we are not Texas, where they have mosquito control in every jurisdiction. We’re going to have to figure this out together,” Dr. Levine told lawmakers this month.

Only a handful of Virginia jurisdictions have local mosquito surveillance and control programs; many rely on help from the state, whose own mosquito program has been unfunded and defunct the last couple of years, said David Gaines, state public health entomologist.

Virginia’s anti-Zika efforts are currently being funded through what’s left of a federal Ebola grant, which amounts to about $700,000. The state has enough money to test only 2,000 mosquito pools this year but that could increase when it gets more funding in August, Gaines said.

Two biologists will be hired to travel around the state and investigate mosquito populations, collect samples for testing and disrupt their breeding grounds. If an outbreak happens in an area without a mosquito control program, the state will ask a nearby program to step in or help the community hire a private company.

“We are actively pursuing solutions if those methods are deemed to be necessary,” said Laurie Forlano, state epidemiologist.

The Asian tiger mosquito — one of the species capable of spreading Zika — is prevalent in Virginia, but experts consider it less of a threat for triggering outbreaks than the Aedes aegypti, which has been far less common in Virginia.

Zika is mainly a threat to unborn children and can cause a serious birth defect called microcephaly. There have been more than 500 confirmed cases in the continental U.S. — including at least 15 in Virginia — but they have all been linked to overseas travel.

In April, Virginia’s state lab began testing for Zika in samples from people who feel sick after traveling. By mid-June, the state will also be able to test mosquitoes for the disease, Gaines said.

Mosquitoes need standing water to breed, so the public can play a big role in preventing Zika’s spread by removing their habitats. Both the Asian tiger and Aedes aegypti breed in containers often found around people’s homes, like gutters and open containers.

“It takes only one person with a flooded boat in a backyard to flood a whole neighborhood with Asian tiger mosquitoes,” said Gaines said.