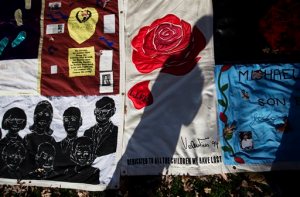 FILE – In this Monday, Dec. 1, 2014 file photo, a viewer casts a shadow while looking over some 800 AIDS memorial quilt panels on display as part of World AIDS Day at Emory University in Atlanta. A study by the university released on Tuesday, May 17, 2016 offers a new look at how common HIV is in different metro areas of the U.S. Southern metropolises top the list with HIV diagnosed in about 4 in 10 gay and bisexual men in Jackson, Mississippi, and 3 in 10 in El Paso, Texas; Augusta, Georgia; and Baton Rouge, Louisiana. (AP Photo/David Goldman)

NEW YORK (AP) — Three out of every 10 gay or bisexual men in several cities in the U.S. South have been diagnosed with the AIDS virus, three times the national rate, according to a study about how common HIV infections are in metro areas.

The study echoes other research that reported higher rates of HIV diagnoses in the South, in urban areas, and in gay and bisexual men, but it is the first to look at how common HIV diagnoses are in these men by city.

“For the first time, we can see not only the numbers, but the proportions,” said Dr. Jonathan Mermin of the U.S. Centers for Disease Control and Prevention.

According to the report, about 11 percent of gay and bisexual men had been diagnosed living with an HIV infection nationwide during the time covered by the study.

Emory University researchers produced the new numbers using national counts of HIV diagnoses in different communities. Lacking good census counts of sexually active gay and bisexual men, they used data from previous studies to calculate how many men had sex with other men.

In its look at metro areas, the study counts only those who have tested positive for HIV. Because many HIV cases are not diagnosed, those numbers don’t reflect how common HIV infections really are in each area. It’s also not clear what factors may vary from city to city that might explain differing rates.

Still, while the largest total numbers of gay and bisexual cases are in large cities like New York and Los Angeles, this research gives a better understanding that the chance of encountering an infected gay or bisexual man is far greater in some smaller communities, some experts said.

The research was released Tuesday through an obscure publication, the Journal of Medical Internet Research. CDC officials described the work as important and useful in deciding how to target HIV prevention funds.