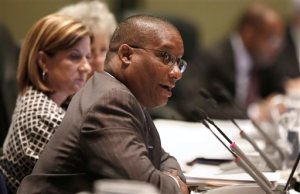 Mike Williams, athletic director for the University of California, Berkeley, discusses a proposal to expand financial aid to student athletes in the event of a career-ending sports injury, during a meeting of the University of California governing board Wednesday, May 11, 2016, in Sacramento, Calif. Williams and Teresa Gould, left, interim athletic director for UC Davis, were part of a working group tasked with making recommendations for improving the well-being of participants in intercollegiate sports. The board approved the plan to greatly expand the number of student-athletes guaranteed financial aid to complete their studies if they have a career-ending injury. The proposal is set to go to the full board on Thursday. (AP Photo/Rich Pedroncelli)

SAN FRANCISCO (AP) — A policy that would nearly triple the number of University of California student-athletes guaranteed continued financial aid in the event of a career-ending sports injury received unanimous approval Wednesday, May 11, from a committee of the university’s governing board.

The proposal came from a working group of UC athletic directors tasked with making recommendations for improving the academic and emotional well-being of students who participate in college sports at the highest levels.

A number of other universities and athletic conferences are wrestling with the issue amid concerns over low graduation and high injury rates among student-athletes in high-profile sports such as basketball and football.

A 2012 state law required the four California universities in the Pacific 12 Conference, including UC Berkeley and UCLA, to continue providing financial support to athletes permanently side-lined by injuries. The policy considered Wednesday would extend that protection to students receiving athletic scholarships at the Davis, Irvine, Riverside, Santa Barbara and San Diego campuses.

It must still be approved by the full Board of Regents, which is set to consider it Thursday.

Elizabeth Hendrix, 19, a water polo player at UC Santa Barbara, said student-athletes would be reassured to know they don’t have to worry about losing scholarship money as they struggle to excel in their sport and their studies.

Hendrix’ gets $1,000 a year to compete for the Gauchos and has teammates who receive much larger scholarships. Last year, a fellow water polo player had her shoulder broken during a match and had to undergo surgery and physical therapy that put her out of commission until the end of her senior year, Hendrix said.

“When you are told you are no longer allowed to play your sport and you have been playing for however long and you are out, done, not by choice, it’s really quite life-changing obviously,” she said.

The policy would apply to students who are injured while practicing or competing and who receive athletic merit scholarships in Division I and Division II programs.

It does not cover student-athletes at UC Santa Cruz, which is Division III, or UC Merced, which is not a member of the National Collegiate Athletic Association. Neither school offers sports scholarships.

The university system awarded 2,686 athletic scholarships last year, including 528 to students at Berkeley and 460 to students at UCLA, officials said.

The financial support was among 14 recommendations put forward by the athletic directors and passed by the regents’ Educational Policy Committee at a meeting in Sacramento on Wednesday.

Other proposals include identifying recruits who might need extra academic help once they get to college; requiring students who are struggling in the classroom to meet with counselors trained to work with athletes; making sure new athlete orientations cover topics such as sexual misconduct, mental health and diversity; and giving student-athletes priority in registering for classes that suit their schedules.

Lt. Gov. Gavin Newsom serves as a UC regent and has criticized the university’s record in ensuring that athletes get the help they need to succeed in the classroom. His comments led to the creation of the working group.

He said he supports the recommendations approved Wednesday but characterized them as “nibbling around the edges” of the problem.

“In many ways we are all accountable, and I just think we can do more and do better,” Newsom said.

Former UCLA linebacker Ramogi Huma, president of the National College Players Association, said promising athletes money to stay in school even if they can no longer compete represents “a solid gain.”

Still, college players are losing out without the ability to unionize, be paid or exert other rights for which his group has been advocating, Hama said.

“Even though players aren’t in this room talking to the UC regents about what should happen, more and more they are standing up and that’s having an impact,” he said.

The UC working group also contemplated whether the university should follow the Pac-12 in awarding four-year athletic scholarships instead of providing them on a year-to-year basis.

It concluded that the costs of such an arrangement would be prohibitive for schools other than UCLA and Berkeley that do not receive money from game broadcasts.

This story has been corrected to show that UC Merced is not a Division III member of the NCAA.
Copyright 2016 The Associated Press. All rights reserved. This material may not be published, broadcast, rewritten or redistributed.