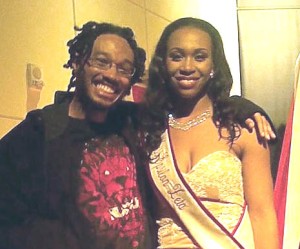 While Angelena (who was recently named 2016-2017 “Miss Epsilon Zeta” of the Epsilon Zeta Chapter of Kappa Alpha Psi fraternity, Inc.) seems to be the more outgoing, pageant girl yet Army strong type, Antonio is more reserved. He is a part of the creative writing club on campus and has been a journalist for the Spartan Echo. Although the two seem to be polar opposites, their fates still somehow managed to align.

NSU senior Antonio Garland would have never expected the series of events that unfolded in his life this semester. While many students are finding new friends and rekindling old flings, Garland had a chance encounter that resulted in him finding the sister he never knew. This reunion started when Garland introduced himself to a classmate during the first day of the semester.

“I found it strange that she was from the same place where I was born in and we had the same last name. Lynchburg is a small city and I thought that maybe she was a distant cousin,” Garland told the Spartan Echo.

After questioning the young woman whom Garland seemed intrigued by, Garland began throwing out names and family connections. He soon found out that the girl was indeed a relative. However, she was not a distant cousin, Garland and his classmate were siblings.

“We have the same grandmother, I never really knew my father but I was aware he had other children. It was all really weird,” said Garland.

Through this random conversation, Garland also found that he has other siblings, including an older brother all of who lived in the Lynchburg area, where Garland was born.

So how can it be possible that a brother and sister from the same area had never met before? Garland’s mother went through great lengths to sever the communication between herself and Garland’s father. As time went on, the separation left Garland unbeknownst to his father’s side of the family.

“My mother said that she knew about Antonio but she hadn’t seen him since he was three years old at a mall with his mother, Joyce. His mom was very clear about not allowing Antonio to have contact with his father,” Angelena Garland said.

For Antonio, he’s just happy that he could have the experience to learn more about a family he knew nothing about.

“Overnight I went from having one new sister to having five siblings I never knew about,” said Garland

Angelena was stunned by the reunion as well. She had only found out about another sibling just two years prior.

“I just recently met my older brother in 2014 when his mother reached out to me on Facebook. So when I met Antonio, it was like ‘O.K. I need to call dad!’”

While Angelena (who was recently named 2016-2017 “Miss Epsilon Zeta” of the Epsilon Zeta Chapter of Kappa Alpha Psi fraternity, Inc.) seems to be the more outgoing, pageant girl–yet, Army strong–type, Antonio is more reserved. He is a part of the creative writing club on campus and has been a journalist and news editor for the Spartan Echo. Although the two seem to be polar opposites, their fates still somehow managed to align.

Since meeting, the two have had a lot of catching up to do. The next step for the Garland clan is to get the family together. Another twist in this story is that Garland has another sister on campus who works for the financial aid department.

“We want to get all of our mothers together so that we can sit down and have a get-together,”

“It’s crazy because I came to Norfolk State because I was given the opportunity to commission as an officer [Army.] I could have gone to any college in the country. I was considering school in Texas because that’s where I was but a lieutenant I met recommended NSU, that’s why I’m here.”

As for Antonio, his first pick was Old Dominion University. He only planned on staying at NSU for a semester. The two are in the same major as well.

It seems that Norfolk State was the tie that bound this family back together.