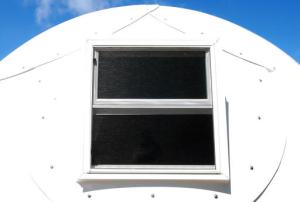 In this Friday, April 22, 2016 photo, the window of a dome-shaped shelter is shown at the First Assembly of God church in Honolulu. The church is looking into an unexpected solution to state’s homeless crisis: they’re planning to erect Alaska-made igloos to house homeless families. The snow-inspired dome-shape structures would appear at first glance to be a misfit among the island state’s palm trees and sandy beaches, but their bright fiberglass exterior reflects the sun, shading those inside. (AP Photo/Caleb Jones)

HONOLULU (AP) — A church in Hawaii looking to address the state’s ongoing homelessness crisis has settled on a solution that on first look appears better suited for the frigid winters of Alaska than the islands’ tropical climate: igloos.

There’s no risk of the dome-shaped structures melting. They are made of fiberglass and their construction keeps the interior about 10-15 degrees cooler when the hot sun is blazing down, officials at First Assembly of God in Honolulu said.

Church officials plan to order a dozen homes, each of which can house four people, and erect them on the windward side of Oahu on land that the church had planned to use as a cabin retreat for its members.

“It is a crisis situation,” said Klayton Ko, the church’s senior pastor, noting that the igloos can be part of an interim solution until several years from now when new affordable housing becomes available.

The igloos are the latest idea in the islands as the state struggles to deal with the nation’s highest per capita homelessness rate. Honolulu is using shipping containers to house some people, and others are pushing traditional thatched “hale” homes.

It’s not the first time igloos or domes have been deployed before for the homeless. In Los Angeles, about 35 people lived in a cluster of them called “Dome Village” beginning in 1993, but the shelter closed in 2006 when the property owner raised the rent.

Ko said he was inspired when he read about the village online.

The igloos have 21 panels that overlap like fish scales, said Don Kubley, president and CEO of Juneau-based InterShelter, which manufactures the igloos. “The panels stack like Pringle potato chips and can fit in the back of a pickup truck,” Kubley said.

The 20-foot-wide, 314-square-foot domes will cost the church about $9,500 each, not including a floor or base, plus $800 each for shipping, Kubley said. The church has raised about $100,000 for the project so far through donations from its members and other churches, and it’s seeking corporate sponsors, said Daniel Kaneshiro, pastor at First Assembly of God.

Oregon-based Pacific Domes has supplied domes to homeless shelters, and their structures were used to house people who lost their homes in Hurricanes Andrew, Katrina and other major disasters, said Asha Deliverance, the company’s founder.

The company has worked on proposals to erect domes on a large scale for homeless people in major cities, including San Francisco, but none of the projects have panned out, she said.

“It’s been a really touchy subject, because every city wants to get rid of their homeless,” Deliverance said. “They don’t want to support homelessness and what that attracts.”

Single units in the pastel-colored containers are big enough to hold a cot and some personal belongings, and residents use communal showers and facilities at a trailer on-site. Three meals per day are served at a cluster of picnic tables shaded by an awning.

“It’s like an upgraded camping experience,” said Kimo Carvalho, spokesman for the Institute for Human Services, the nonprofit that runs the shelter.

The Hale Mauliola shelter helped Clayton “Uncle Clay” Gohier, a former Waikiki surf instructor and canoe captain, get off the streets and recover from a knee infection.

“I didn’t have a home I could call my own,” Gohier said. “I lived in a van, because the rent was so high in Waikiki.”

Now, living in the shelter with his wife, he’s getting the help he needs to find a permanent home. “A lot of good things are coming out of here, for me and my wife,” he said.