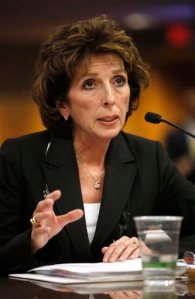 FILE – In this Dec. 14, 2011 file photo, University of California, Davis, Chancellor Linda Katehi, told lawmakers that she never ordered campus police to use force or pepper spray on students last month, while testifying at a legislative hearing at the Capitol in Sacramento, Calif. Katehi has been placed on leave amid an uproar stemming in part from the school’s hiring of consultants to improve its image, following a widely criticized protest pepper spraying incident by police. UC President Janet Napolitano’s office announced Wednesday, April 27, 2016, that she is appointing an outside investigator to determine whether the actions of Chancellor Katehi have violated university policies. (AP Photo/Rich Pedroncelli, File)

SAN FRANCISCO (AP) — University of California President Janet Napolitano felt compelled to remove the chancellor of UC Davis after documents contradicted the campus leader’s contention that she did not have any dealings with contractors that were hired to bolster the school’s image online, a university spokeswoman said Thursday, April 28.

Napolitano put Chancellor Linda Katehi on paid leave Wednesday pending the outcome of an investigation of her role in the decision to retain image consultants to counter bad publicity from the pepper-spraying of demonstrators by campus police in 2011.

Katehi expects to be fully cleared and welcomes “a full release of all relevant documents and public records,” her lawyer said in a statement late Wednesday.

The public records originally obtained by The Sacramento Bee include a January 2013 email exchange between Katehi’s executive assistant and a Maryland public relations firm about scheduling a meeting at Davis. A few months earlier, the firm had submitted a proposal for “A Proactive Online Brand Repair and Reputation Management Campaign” on behalf of both the campus and the chancellor.

Emails to and from a Sacramento-based social media monitoring company UC Davis has worked with at least since the beginning of the year also were among the documents. Katehi’s chief of staff, speech writer and online communications director were among the recipients of detailed “social listening” reports documenting negative attention she was receiving online.

Napolitano also is concerned that Katehi, 62, has been less than forthcoming about her knowledge of a series of pay raises and promotions her daughter-in-law received while working for a vice chancellor who reports to Katehi, Klein said.

The daughter-in-law received a $50,000 pay raise over 2 ½ years and Katehi recommended that the vice chancellor’s pay go up by 20 percent during the same period, according to a letter Napolitano sent to the chancellor Wednesday.

Katehi’s son is a paid graduate student researcher in the Center for Transnational Health, an academic project on health and academic disparities that was put under his wife’s supervision after one of her promotions. A whistleblower complaint brought to Napolitano’s attention alleges that student fees that were supposed to go toward athletic programs at Davis were redirected to fund the center, Klein said.

“That’s another thing the chancellor says she didn’t know anything about, about money with her daughter-in-law, her son,” Klein said.

The independent probe Napolitano is launching will examine whether there were irregularities surrounding the hiring and compensation of Katehi’s son and daughter-in-law. The chancellor’s husband is an engineering professor at Davis, but “there is no suggestion there is any improprieties” with his employment, she said.

The various issues that will be the subject of the investigation hinge on university policies in the areas of ethics, conflict-of-interest and misappropriation of funds, Klein said.

“This smacks of scapegoating and a rush to judgment driven purely by political optics, not the best interests of the university or the UC system as a whole,” Guzman said in a statement.

Acting Chancellor Ralph Hexter, who served as second in command under Katehi until Napolitano tapped him to temporarily fill her job on Wednesday, said during a news conference Thursday that he has not seen the records that prompted the Napolitano to act, but he said he understands why she did so.

Hexter also praised Katehi and said from his discussions with her that she understands that only an investigation will help her restore her reputation and clear her name.

“We are never afraid of light being shown on what we are doing. We are public servants,” he said. “If there were things that were not according to policy, let’s find out about them and correct them.”