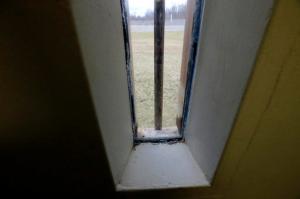 FILE – In this Feb. 25, 2016 file photo, fences with barbed wire are visible from the window of a cell in what prison officials describe as a disciplinary confinement area rather than solitary confinement, at the Rhode Island Department of Corrections High Security Center, in Cranston, R.I. Roberta Richman, a former warden who spent 33 years working in the state Department of Corrections who retired in 2012, testified Wednesday night, April 6, 2016, in favor of legislation that would limit the isolation of inmates to no more than 15 days at a time. “Too many inmates come out of isolation angrier and more dangerous than they were when they went in,” Richman said. (AP Photo/Steven Senne, File)

COLUMBIA, S.C. (AP) — Music created by inmates at one of South Carolina’s most dangerous prisons was making its way to the White House on Wednesday, thanks to a group of musicians affiliated with Carnegie Hall.

Three musicians from Decoda, a nonprofit organization that promotes music as rehabilitation for inmates were scheduled to perform a piece called “Welcome to my World” for an audience expected to include U.S. Attorney General Loretta Lynch.

The song was written earlier this year by inmates at Lee Correctional Institution, a maximum-security prison in Bishopville. Members of Decoda worked for a week with a select group of inmates, guiding them through the song-writing process and helping them put together a concert of their own.

Since 2014, Claire Bryant, a Juilliard-trained cellist and member of Decoda, has been bringing the organization to Lee, a 1,500-inmate prison that holds some of South Carolina’s most violent, longest-serving offenders and has been known for riots and brutality.

She and a handful of other musicians mentor the men in groups of four or five for up to eight hours a day, exploring genres of music and the songwriting process and ultimately creating more than a dozen finished pieces for a concert.

An existing music program at Lee provides select, well-behaved inmates the opportunity to learn guitar, drums, bass, and even cello and violin. During their week together, Decoda artists also introduce the men to other instruments such as the bassoon.

Wednesday’s performance is part of National Reentry Week, aimed at helping the roughly 600,000 state and federal prisoners who are released and return each year to U.S. neighborhoods to better acclimate to society. James Austin Smith, one of Decoda’s art directors and an oboe player in Wednesday’s performance, said his group’s objective is to demonstrate that music can be enjoyed by — and helpful to — everyone.

“The basic goal behind our work is to ensure that music and a connection with music is available to anyone, anywhere, regardless of circumstance,” Smith, 32, told The Associated Press by phone as he traveled from New York City to Washington for the performance.

Smith, who studied at Northwestern and Yale, said that his rendition of the inmates’ work would be a little different, since his group is using strings and woodwinds, not the drums and vocals that inmates used to create it.

“The key is to represent some of the work that has been done at Lee,” he said, with a laugh. “That’s the No. 1 thing. We’re going to our best to get as funky as we can with it.”

Kinnard can be reached at http://twitter.com/MegKinnardAP . Read more of her work at http://bigstory.ap.org/content/meg-kinnard/