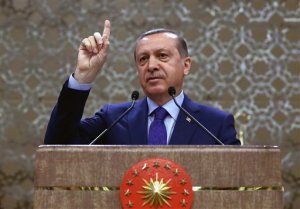 Turkish President Recep Tayyip Erdogan addresses a meeting of local administrators in Ankara, Turkey, Wednesday, April 6, 2016. Turkey’s Justice Minister Bekir Bozdag says the government will work on a regulation that would allow authorities to strip Turks deemed to be supporting terrorism of their Turkish citizenship. Bozdag’s comments on Wednesday came a day after Erdogan called for such a measure to strengthen Turkey’s fight against terrorism.(Yasin Bulbul/Presidential Press Service, Pool via AP)

ANKARA, Turkey (AP) — A Russian news agency says its general manager for Turkey has been barred from entering the country, days after Turkish authorities blocked access to its website.

State-owned Sputnik quoted Tural Kerimov as saying Wednesday that he was informed after landing at Istanbul’s Ataturk Airport that he has been barred from entering Turkey and would be forced to return to Russia on the first available plane.

Sputnik said no reason was given. It said his press card and residence permit were confiscated.

A day earlier, a German reporter was prevented from entering Turkey and sent back to Cairo where he is based.

Turkey’s information technology agency blocked access to Sputnik from Turkey last week following the deterioration of relations between Ankara and Moscow over Turkey’s downing of a Russian plane.