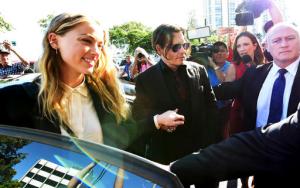 SYDNEY (AP) — Was the filmed apology over an international dog smuggling scandal supposed to look like a hostage video? Was the weirdly wooden delivery a deliberate protest by the unhappy actors? And does the Australian politician at the heart of the world’s most bizarre biosecurity case think he could have directed it better himself?

Well, yes — at least to the last question — Australian Agriculture Minister Barnaby Joyce said on Tuesday, Apr. 19, when asked about the widely panned videotaped apology from Johnny Depp and his wife Amber Heard, the latter of whom pleaded guilty in an Australian court to falsifying an immigration document when the couple brought their dogs to Australia last year.

“I don’t think he’ll get an Academy Award for his performance … he looked like he was auditioning for ‘The Godfather,'” Joyce told Australian Broadcasting Corp. radio with a chuckle. “At the end of it, we’ve got a message that is going all around the world right now — it’s going off like a frog in a sock — telling people that if you come into this nation and you don’t obey our laws, you’re in trouble.”

“Going off like a frog in a sock,” by the way, is Australian slang for “going crazy.”

The “war on terrier” debacle has been going crazy since last year, when Joyce helped catapult the case into global headlines by accusing the couple of smuggling their Yorkshire terriers, Pistol and Boo, into Australia while Depp was filming the fifth movie in the “Pirates of the Caribbean” series.

Joyce, who is now Australia’s deputy prime minister, prompted countless parodies by stating: “It’s time that Pistol and Boo buggered off back to the United States.” He then ominously warned that the dogs would be euthanized if they didn’t flee the country within 72 hours — and flee they did, with just hours to spare.

On Monday, Heard pleaded guilty in a Queensland state court to falsifying her incoming passenger card by failing to disclose that she had the pooches with her, but avoided a prison sentence. During the hearing, her lawyer submitted the couple’s now infamous taped apology to the court.

In the decidedly low-budget clip, Depp and Heard sit stone-faced in front of the camera, delivering stilted lines about the importance of protecting Australia’s biodiversity by respecting the country’s strict quarantine laws. Bringing pets into Australia involves applying for a permit and quarantine on arrival of at least 10 days to prevent the spread of diseases such as rabies.

“Australia is a wonderful island,” Heard begins, “with a treasure trove of unique plants, animals and people.”

“Australians are just as unique — both warm and direct,” a grim-looking Depp later chimes in. “When you disrespect Australian law, they will tell you firmly.”

The clip quickly began trending on Twitter, with many — including comedian Ricky Gervais — comparing it to a hostage video. Others questioned whether the couple’s awkward delivery was a deliberate swipe at the Australian government.

Joyce sidestepped questions about the origins of the video on Monday, saying he didn’t know if the agriculture department had helped with the script. The department later confirmed it had “provided input concerning the offense and biosecurity messaging,” but said the video came about after Heard herself offered to publicly apologize for the incident.

The video’s production was part of negotiations between her defense team and the prosecution, the department said in a statement.

Still, Joyce acknowledged the couple was likely less than enthusiastic about the project.

“I don’t think it would have been something that they would have willingly wanted to do,” Joyce told reporters.

During an interview on Channel 7’s “Sunrise” on Tuesday, Joyce couldn’t contain his giggles as he watched the video again and rejected suggestions that he had written the script himself.

“As far as me directing that atrocious movie, no. Even I could have done a little bit better than that,” Joyce said with a laugh before mimicking what he would have been like as the director: “Do it again, Johnny, do it with gusto, mate! A bit of gusto, come on. Rise to the camera, old trout! Rise to the camera!”