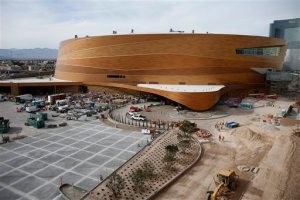 In this March 3, 2016, photo, work continues on T-Mobile Arena in Las Vegas. MGM officials think they will hit the jackpot with a new $375 million arena that sits in the middle of the glittering Las Vegas Strip. (AP Photo/John Locher)

LAS VEGAS (AP) — The newest addition to the glittering Las Vegas Strip debuts next week without a slot machine or a blackjack table in sight.

No NHL team, either, but that doesn’t stop MGM officials from believing they will hit the jackpot with a new $375 million arena that sits in the middle of all the best action this gambling town has to offer.

“We’re ready for an NHL team,” said Rick Arpin, senior vice president of entertainment for MGM Resorts International. “But our primary motivation was not for a pro sports team. We built this building to get events we couldn’t do otherwise, and pro sports certainly fits in that.”

The T-Mobile Arena opens next week in a very Vegas way, with the hometown Killers headlining along with, of all people, Wayne Newton as a special guest. Once inside, concert-goers will find amenities no one could have imagined when Mr. Las Vegas opened as a lounge act downtown in 1958, including an 18,000-square-foot nightclub that will offer bottle service, DJs and dazzling views of the Strip.

The opener will be followed quickly by two highly anticipated concerts by a reunited Guns N’ Roses, the first the group has played together in 23 years.

A few weeks later, Mexican boxing superstar Canelo Alvarez faces off against Amir Khan in a Cinco de Mayo spectacular. Come summer, the UFC will be taking up residency with one of its big pay-per-view shows in an arena that will seat 20,000 for combat sports.

That’s a good year for many arenas. But Arpin says it’s just the start for this one, sandwiched behind the New York-New York and Monte Carlo resorts and joined to the Strip by a pedestrian park that adds a touch of greenery to the famed tourist boulevard.

With three other arenas nearby — two operated by the MGM — there wouldn’t seem to be a need for another one. But Arpin said the size and amenities of T-Mobile Arena will help the city get events it was missing before.

“With all the great facilities we have, what we were missing is the sort of modern facility that could get us events incremental to the market,” he said. “The big events, the big concerts they want the premier buildings and this puts us in that echelon.”

In addition to the nightclub there are the obligatory suites — all 42 have been leased — and premium seating areas designed to maximize the money spent by every ticket holder. There are also eight premium event level suites, with one still available at a cool $1 million a year.

What many people will be talking about, though, are two triangular walkways up high that jut out over the arena floor.

“A great place for selfies, for sure,” Arpin said.

Arpin said the MGM — which has partnered with industry giant AEG — expects to do 100 events a year in the new arena without a hockey team, and 130 if billionaire Bill Foley is successful in convincing the NHL to give Las Vegas its first major league professional franchise. Nearly 14,000 people have already put down season ticket deposits for a possible team in the arena, which will seat 17,500 for hockey.

Foley is ready to pay $500 million for an expansion team, and the NHL appears interested. The league is considering applications from Las Vegas and Quebec City, though owners have yet to vote on whether to expand. NHL Commissioner Gary Bettman said at GM meetings last month that a decision would have to be reached by June if the league is to expand for the 2017-18 season.

If a team comes, the arena is ready. There are two locker rooms built exclusively for hockey, and two others built for the NBA, should that league also come calling.

What the arena may not have enough of is parking. No new garages were built for it — one is eventually planned — though MGM officials say they believe existing hotel parking garages should suffice and that many people attending events will walk or take taxis from their hotels.

“It’s a beautiful arena, but I’m really concerned about the lack of parking,” boxing promoter Bob Arum said. “Also, I don’t know if you need that many seats for many of these events.”

The arena opens just as competing hotel operator Sheldon Adelson is pushing a $1.3 billion stadium project just off the Strip. Unlike the T-Mobile Arena, which was privately financed by MGM, Adelson’s Las Vegas Sands plans to ask for public money to build the proposed 65,000-seat facility on hopes of getting an NFL team.

While the stadium is still a concept, the arena is now a reality. That has brought, among other things, George Strait to do a semi-residency of 6-8 dates a year, the annual Pac-12 Conference basketball tournament and possibly NCAA postseason play if the organization relaxes its regulations about playing in a gambling city.

Arpin said it’s all about the city continuing to be a big time player in entertainment and special events.

“Part of this is evolution, not revolution,” Arpin said. “It’s making sure we stay relevant for years to come. This arena does that, and more.”