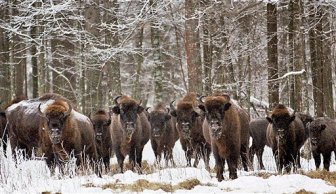 FILE – In this Feb. 2005 file photo, a herd of bison, Europe’s largest land mammal, gather in the centuries-old Bialowieza Forest in Poland, Europes last primeval forest that is on the UNESCO World Heritage list. Polands Environment Minister Jan Szyszko said in Warsaw, Poland on Friday, March 25, 2016 that he has approved a deeply contested plan of extensive logging in the forest, arguing it will help save it from bark beetle, a kind of woodworm that makes the trees die. (AP Photo/Michal Kosc) POLAND OUT

WARSAW, Poland (AP) — Poland’s environment minister has approved a deeply contested plan to allow extensive logging in Europe’s last pristine forest, arguing that the decision will help save it from bark beetle, a kind of woodworm.

Following weeks of deliberations and protests, Jan Szyszko said Friday, Mar.25 said he has approved the logging of some 180,000 cubic meters (6.4 million cubic feet) of worm-affected trees over the next 10 years in the Bialowieza Forest. It is more than four times as much as in a previous plan.

“In line with our knowledge, in line with what the scientists and local residents are saying, we will take action in order to stop the degradation of key habitats and of dying out of species,” Szyszko said.

He argued that the European Union would sue Poland if the logging were not implemented.

The decision goes against the advice of Greenpeace and other environmental organizations, who have described the proposed logging as a “black scenario” for the centuries-old Bialowieza Forest. They have insisted that nature alone should be allowed to deal with the plague of the bark beetle that drills tiny tunnels in trees and causes them to die.

The forest is on UNESCO’s World Heritage list. It covers 1,500 square kilometers (580 square miles) in eastern Poland and western Belarus and is home to hundreds of wild bison, over 60 other species of mammals and hundreds of species of lichens, plants and trees.

Szyszko said a third of the forest would be left alone but will be photographed and monitored by experts who will assess how nature is dealing with the plague.

No logging is planned in the Bialowieza National Park, which is a specially protected part of the forest.