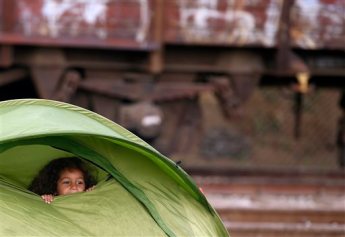 A migrant girl looks out from a tent at a train station near the make shift refugee camp at the northern Greek border point of Idomeni, Greece, Thursday, March 24, 2016. Conditions in Idomeni, where thousands have been stranded since the border shut to refugees earlier this month, have steadily deteriorated, exacerbated by days of rain that have turned the fields into muddy swamps. (AP Photo/Darko Vojinovic)

WARSAW, Poland (AP) — The Latest on the flow of migrants into Europe (all times local):

The Organization for Security and Cooperation in Europe has started training Albanian border guards to prepare them for a possible influx of refugees.

Migrants may be forced to use the country as a new route into Western Europe, because its regional neighbors Macedonia and Serbia have closed their southern borders.

The OSCE on Thursday, Mar. 24, launched a series of workshops for the Albanian border and migration police in three border districts to prepare them “in light of the increased migrant flows through the Western Balkans,” according to a statement. Albanian police officers are being trained on how to cope with “migrant routes, the pre-screening of migrants, profiling of possible terrorist fighters, and the detection of criminal offences.”

Albania, also cooperating with Italy to get ready for a possible flow, hasn’t been a transit route so far.

A government official in Greece says deportations of migrants and refugees from Greek islands to Turkey would start on April 4, and would be carried out by the European Union’s border protection agency, Frontex.

Giorgos Kyritsis, a spokesman for a government refugee crisis committee, told The Associated Press that deportations under an international agreement on refugees would start with migrants who had made no asylum claim while being held in detention in Greece.

Earlier, Kyritsis announced that the government was building 30,000 new places at refugee shelters over the next 20 days for refugees who voluntarily leave areas they have camped out at the Greek-Macedonian border and the country’s main port of Piraeus.

He said the legislative amendments needed for the EU-Turkey deal to take full effect in Greece would be submitted to parliament next Wednesday, Mar.23.

Dozens of volunteers and aid group workers on the Greek island of Lesbos have demonstrated against the detention of migrants and refugees on the island under the new EU-Turkey agreement.

About 100 aid workers and volunteers held banners and shouted slogans outside the Moria camp Thursday, Mar. 24, while those held inside clapped in support. Riot police guarded the center’s main gate.

Last week’s EU-Turkey agreement stipulates those arriving on Greek islands from the Turkish coast as of March 20 would be detained and sent back. For every Syrian returned, another Syrian in Turkey will be relocated to a European country.

European officials say the system aims to discourage refugees from risking their lives to cross the Aegean. Human rights and aid groups have strongly criticized the decision as inhumane and illegal.

The U.N. human rights chief says the European Union’s deal with Turkey to send refugees and migrants back across the Aegean from Greece appears to contravene international human rights laws and standards.

Zeid Raad al-Hussein says the flood of refugees to Europe from places like Iraq, Syria and Afghanistan is “manageable” if the European bloc follows its own laws and principles.

In a statement Thursday, Mar.24, Zeid warned of the prospect of a “deeply problematic knock-on effect” elsewhere in the world if the EU “starts to circumvent international law.”

Under the deal that took effect over the weekend, Greek authorities can detain and return newly arrived refugees to Turkey, and the EU will accelerate financial aid to Ankara.

U.N. agencies and international advocacy groups have already raised concerns about the deal.

Poland’s president has thrown his support behind the government’s decision to renege on a deal to accept thousands of refugees amid security concerns raised by Tuesday’s attacks in Brussels.

Poland’s decision could further affect other countries in the region, some of which have protested the European Union’s plan to allocate some 120,000 migrants. Additionally, European leaders last week struck a deal with Turkey aimed at limiting the influx of migrants to Europe.

Poland’s anti-migrant government had grudgingly confirmed the previous commitment to take in 7,000 refugees. But following the Brussels attacks Prime Minister Beata Szydlo said “I see no possibility for migrants to come to Poland now.”

On Thursday, Mar.24, the spokesman for Polish President Andrzej Duda confirmed that decision and said Europe has failed to efficiently check the arriving migrants.