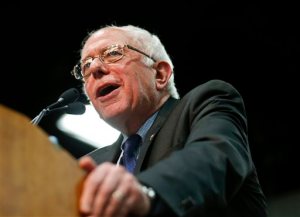 NEW YORK (AP) — Jon Casey has no confidence in his NCAA bracket picks this year.

The 28-year-old technician from Scranton, Pennsylvania, spends hours absorbed in delegate counts and debate strategy instead of his usual winter evening routine of watching college basketball. For Casey and tens of thousands of other Americans now, the presidential campaign is their preferred form of entertainment.

Debates routinely surpass the most popular prime-time shows in audience size. The most-watched cable network for eight of the past nine weeks has been either Fox News Channel or CNN rather than perennials ESPN and HBO. The news stations air countdown clocks until the next debate, town hall or poll closing — anything to let viewers know that more politics is on the way.

“It’s almost like a big chess game,” said Casey, who works for a sports-oriented web site. “One candidate has to make a move and the other candidates have to make counter-moves.”

“I am addicted, absolutely addicted,” said Vana, who has fallen hard for Donald Trump. She’s even cooled on Fox’s Megyn Kelly, a former favorite, given Kelly’s feud with her political hero.

Until this year, Vana, 45, never followed politics closely. Too dry, she said. Now, “I feel like I’ve become a better human being by watching history unfold in real time,” she said.

Top CNN executive Jeff Zucker looks at ratings numbers on his smartphone and calls them “crazy.” Sometimes they double the network’s projections; CNN’s two highest-rated primary nights ever came within the past two months. Like a ski resort dependent on big snowstorms, CNN’s fortunes rise and fall with news cycles. The snow has been piled high all season.

At an investors conference earlier this month, CBS chief executive Leslie Moonves noted that with all the attention paid to politics, and an anticipated advertising haul, “this is going to be a very good year for us.”

When it’s not a debate or primary night, the news networks keep momentum going with their own events, like town hall meetings. After a Fox debate planned for Monday was cancelled, CNN moved in by packaging five separate interviews with the remaining candidates to spread over its prime-time lineup.

So far this year, Fox News, CNN and MSNBC together average 5.7 million viewers in prime time on weekdays, the Nielsen company said. Longtime leader Fox is on top, but CNN’s year-to-year growth of 181 percent beat everyone. Last year at this time, the three networks were drawing an average of 3.4 million viewers each night.

“I’ve covered three presidential elections and three mid-terms for three networks, and I’ve never seen anything like this level of engagement,” said S.E. Cupp, one of CNN’s regular analysts for political nights.

On an airplane recently, a man sat next to her and remarked that he can’t turn CNN off. Cupp thanked him, but he wasn’t necessarily happy: he told her that it’s made him less productive at work.

Trump is most often cited as the driving force for the attention, and his unorthodox campaign dominates coverage. Taking a longer view, NBC’s “Meet the Press” moderator Chuck Todd noted that ratings were also strong in 2008 when no incumbent ran. Presidential campaigns are now part of celebrity culture, and two of the best known political celebrities — Trump and Hillary Clinton — are the most likely nominees, he said.

“The pundits are no longer the only ones being heard,” said Catherine Conger, a teacher from Greenville, S.C. who started a Twitter account just to follow the campaign. “It has become this interactive game all of a sudden. It’s almost like a video game.”

Conger said she’s much more apt to tune in to PBS’ “NewsHour” than “The Big Bang Theory” this year.

“It’s like watching a train wreck,” she said. “You can’t turn away from it.”

Even something that would normally define dull — a transcript of Trump’s interview with The Washington Post editorial board this week — was a heavily trafficked item online.

Szanton said he’s hardly had time for anything else on television the past few months. He appreciates being able to tune in to a news network for 20 minutes at a time and be filled in on what’s going on, but he’s not always watching for enlightenment.

“The debates, for me, are just so entertaining,” Szanton said. “I watch them for pure entertainment. It’s not like I’m going to learn anything new about the candidates. I’m wondering, ‘Is somebody going to mess up, is somebody going to say something stupid? Is there going to be an awkward moment?’

When Trump made an anatomical reference during one debate, Szanton turned to his girlfriend and said, “Did he just say what I thought he said?”

He did. That rock ’em-sock ’em debate on March 3 was the most-watched show on TV that week with 16.8 million viewers. And it’s been that way since the start: The first GOP debate in August 2015 drew 24 million people, about the same viewership as highly anticipated late-season NFL games.

The campaign is heading toward what is traditionally a lull period: when the likely nominees become apparent and before the party conventions. It’s not clear when, or if, that lull will come this year — the best of all possible news for television networks following the campaign minute-by-minute.

Follow David Bauder at twitter.com/dbauder. His work can be found at http://bigstory.ap.org/content/david-bauder