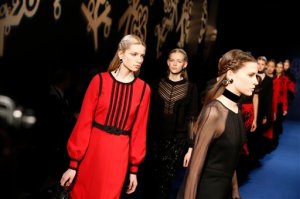 It was the second showing for Christian Dior without a designer.

In line with tradition, the sky was the limit for the show’s decor — a giant mirrored annex installation with huge white sculpted circles. Guests gasped and took photos with the real sky glowing blue above.

Pike posed in a vivid red Dior coat and Alba stopped to be photographed in a black blazer and red Dior pants. She was followed by actress Naomie Harris who posed against the backdrop of the mirrors, which beautifully reflected back the majesty of the historic building inside the storied Cour Carree square.

Inside, large round atriums fell dark as guests awaited the show.

Sadly the collection couldn’t quite live up to the expectations built up by the venue.

Clothes were soft, playing on crisscross motifs and unfurling, draped shoulders — evoking the influential Y-line that Monsieur Dior made famous in his 1955 collection, shortly before his death.

The unfurling also represented a nice play on Dior’s obsession with flowers, furthered by some beautifully vivid red looks.

But overall there was something off-kilter about the fit of the silhouette.

While one archive bar jacket appeared as a saleable slate blue peacoat, elsewhere it appeared as an off-white crepe suit with an overly loose shape.

It was an admirable effort for the Dior Atelier team who designed the 55-looks — but the collection only bolsters the case that Raf Simons’ successor needs to be chosen quickly.

At Issey Miyake, nearly as much thought went into the cutting-edge music of the collection as the show itself.

A new instrument called the “Kankisenthizer” was unveiled, which transforms light into sound — and, in this case, music.

Guests were wowed as musicians Ei Wada and Haruda Yoshida took their places at the top of the runway and proceeded to beam light onto photo-sensors through the blades of an exhaust fan — to splice up the light, and thus make distinct notes.

Mid-way through the display, they broke out into an electro rendition of Johann Pachelbel’s famed Canon. The fact it all came out of an exhaust fan — was quite a sublime, postmodern experience.

The Franco-Japanese house of Issey Miyake continued its exploration of techno-fabrics for fall-winter.

It started on a low, with multicolored cloth baked with geometric lines tending toward an overkill of contrasting color.

But designer Yoshiyuki Miyamae came into his own mid-way through in a wonderful series of pleated looks — in teal blue, navy, purple and red.

Their abstract, voluminous shapes slinked past guests with the back of the garment — the part that holds the most weight — bouncing almost regally in mesmeric three-dimensions.

It was achieved by a unique method of pleating cloth at different angles, and creating twisted forms when steam is applied.

It might have had a little to do with the death of iconic singer David Bowie — who passed away in January, aged 69.

But 48-year-old Isabel Marant’s fashion dial was firmly set on the 1980s.

One look seemed to cite Bowie directly though from the 1970s — from his Ziggy Stardust days in fact: a red-head model with a leopard bomber, shiny studded belt and gray check pants.

But this collection wasn’t limited to one singer.

There was a clear reference of Madonna in her “Like a Virgin” heyday in one look: a purple shirt-dress with black tulle netting in the hair.

The bold and beautiful of Paris Fashion Week partied into the earlier hours Friday at Laperouse at a soiree hosted by Balmain to celebrate its fall-winter show.

At the event overlooking the Seine river, a radiant Alba posed for cameras in a green figure-hugging Balmain dress that almost matched the 20-year-old Gabriel-Kane Day-Lewis, who chatted away in the background, in a green tux.

Day-Lewis — the son of the three-time Oscar winner Daniel, and French actress Isabelle Adjani — has been a recurring fixture on the Paris Fashion scene in recent seasons.

A brunette Gigi Hadid and a blond Kendall Jenner, meanwhile, looked almost inseparable as they showed off their media-grabbing hair color swap — with the mother of the Jenner clan, Kris, watching over.

Thomas Adamson can be followed at http://Twitter.com/ThomasAdamsonAP
Copyright 2016 The Associated Press. All rights reserved. This material may not be published, broadcast, rewritten or redistributed.