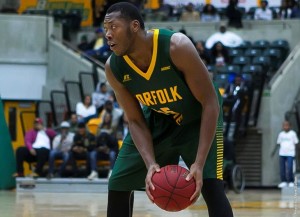 The Spartans also got a strong game from sophomore Jordan Butler, who tallied 18 points on 8-of-10 shooting with seven rebounds and three blocks.

NORFOLK, Va. – Howard cut a 16-point deficit down to three with nine and a half minutes left in the second half, but the Norfolk State men’s basketball team outscored the Bison 25-10 the rest of the way in an 84-66 victory on Monday night at Joseph Echols Hall.

NSU never trailed in the game to improve to 15-15 overall and 11-4 in MEAC play. That moved the Spartans into a tie for second with South Carolina State, which was idle on Monday. Following Hampton’s victory on Monday as well, Norfolk State will either be the No. 2 seed in the MEAC tournament with a win on Thursday over the Pirates or the No. 3 seed with a loss, regardless of what happens in the rest of the league.

Senior D’Shon Taylor had his second straight game with 20 points, shooting 6-of-12 from the field and a perfect 6-of-6 from the foul line to go with a team-best eight rebounds. The Spartans also got a strong game from sophomore Jordan Butler, who tallied 18 points on 8-of-10 shooting with seven rebounds and three blocks.

Norfolk State led by as much as 19 in the first half and went into the break ahead by an 18-point margin after holding the Bison to less than 20 percent from the floor. Howard (12-19, 6-10 MEAC) slowly cut into the lead in the second half in its regular season finale, getting to within three on three different occasions.

The last came with 9:31 left on a layup by Tyler Stone. The Spartans scored the next six points, part of a larger 17-4 run that pushed the lead back to 16 within a five-minute span. Taylor had six points during that time, and sophomore Devonte Banner hit a pair of treys to slowly put the game out of reach for Howard.

NSU had four field goals within a minute and a half as time ticked down to build the margin to as much as 20.

Along with Taylor and Butler, NSU also got solid performances from senior Charles Oliver (16 points, career-high eight rebounds) and junior Preston Bungei (12 points, 3-of-6 shooting, seven rebounds). They helped NSU finish with a 43-37 edge on the glass.

Bungei also made all six of his free throw attempts. NSU ended the night 19-of-22 from the line (86.4 percent), and in the process set the school’s Division I record for free throws made in a season.

The Spartans also outscored Howard in points off turnovers (16-6), second-chance points (22-11) and fastbreak points (12-0). For most of the game, the Bison played with just a six-man rotation.

Senior Jeff Short fed Butler for the deuce as NSU jumped ahead by a 10-5 score to start the contest. Howard never led in the first half but only trailed by as much as six for the first nine minutes of action. Oliver, though, hit his only 3-pointer of the game at the 9:04 mark to cap a 9-0 run and put the Spartans ahead, 26-14.

Up by just seven a short time later, NSU used a 13-1 run to push the lead to 19, 41-22, with just two and a half minutes left in the half. Five different players scored for the Spartans, and Banner capped the spurt with a trey off an inbounds pass.

Bungei made a layup with one second left off an offensive rebound to give the Spartans a 45-27 lead at the intermission.

NSU led by double digits in the second half until the 13:55 mark, when Marcel Boyd cut the lead to 52-44 with a layup. After Short connected on a 3-pointer, the Bison scored eight straight to get to within three. The Spartans answered the next couple of minutes before closing the game on their big run.

Short had nine points and a career-high tying seven assists. Banner also scored nine points on 3-of-4 3-point shooting with two steals. Only six players appeared in the scoring column for NSU.

Boyd tallied a double-double of 16 points and 11 rebounds with three blocks, while MEAC leading scorer James Daniel had 15 points on just 3-of-13 shooting. Stone ended with six points, 12 boards and two blocks.

NSU will close out the regular season Thursday at home when the Spartans host Hampton for the Battle of the Bay at 8 p.m.