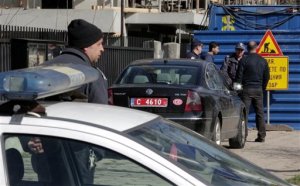 SOFIA, Bulgaria (AP) — A Palestinian militant wanted for a 1986 killing in Israel plunged to his death Friday, Feb. 26, from the Palestinian Embassy in Bulgaria, where he had been holed up for two months to avoid extradition, officials said.

Palestinians immediately accused Israel of killing Omar Nayef Zayed, 52. Israel denied involvement and Bulgarian authorities said they had yet to determine whether he fell, jumped or was pushed from the building.

Zayed was alive Friday, Feb. 26, morning when an embassy staffer found him behind the four-story building, but he died before paramedics could take him to a hospital, Bulgarian Prosecutor General Sotir Tsatsarov said.

Video footage of the site afterward showed a pool of blood near the embassy, located in a leafy, quiet neighborhood of Sofia.

The Palestinian militant group PFLP initially said Zayed had been shot, but Palestinian Ambassador Ahmed al-Madbuh did not repeat those claims and Bulgarian officials insisted there were no gunshot wounds.

Israeli Foreign Ministry Spokesman Emmanuel Nahshon said “this is not an Israeli issue” but would not comment further.

Adding to the mystery, the death came hours after Bulgarian Prime Minister Boiko Borisov returned from a visit to Israel and the Palestinian Authority, where he discussed a 2015 Israeli extradition request for Zayed with both the Israeli prime minister and senior Palestinian officials.

“I told all sides that our prosecution had received a request for extradition and now a court was to decide whether he will be extradited or not,” Borisov told Parliament Friday, Feb. 26.

Bulgarian authorities called on Zayed to surrender after Israel made the extradition request, but he refused and sought refuge at the embassy.

Al-Madbuh said the embassy demanded security guarantees several times, but Bulgaria’s Foreign Ministry did not act. He said Bulgaria withdrew security guards seven years ago because there had been no attacks on the embassy for 20 years. Bulgarians did not immediately respond to those allegations.

PFLP, the militant group, said Zayed was a member who, together with his brother and another Palestinian, stabbed a Jewish student to death in Jerusalem’s Old City 1986. They received life sentences.

In 1990, Zayed was hospitalized in Bethlehem following a hunger strike, and later escaped from the hospital, moving to several Arab countries before settling in Bulgaria. He had lived in Sofia since 1994 and had a Palestinian wife and three children.

His brother, Ahmed Zayed, and the other Palestinian were part of a lopsided prisoner swap in 2011 in which more than 1,000 Palestinian prisoners were exchanged for an Israeli soldier, Gilad Schalit, who had been held by Hamas-allied militants in Gaza for five years.

It wouldn’t be the first time the Mideast conflict has played out on Bulgarian soil. In 2012 a suicide bomber set off an explosion on a bus with Israeli tourists at the beach resort of Burgas. Five Israelis and their Bulgarian driver were killed, and 32 other Israelis were injured. Hezbollah, the Iranian-backed Lebanese militant group, was believed to be behind the attack.

Deitch reported from Jerusalem. Vanessa Gera in Warsaw, Poland and Alison Mutler in Bucharest, Romania, contributed to this report.