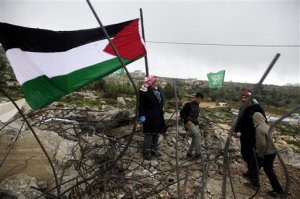 Palestinians stand next to their national flag and on the rubble of the demolished house of Raid Halil, who killed two Israelis in a stabbing attack in Tel Aviv in November, that was demolished by Israeli bulldozers, in the West Bank village of Dura, near Hebron, Tuesday, Feb. 23, 2016. Israel demolished the homes of two Palestinians who committed separate attacks against Israelis that killed five people, the military said. (AP Photo/Mahmoud Illean)

The West Bank homes of the attackers, identified as Raid Halil and Mahmoud Harub, were demolished as a five month-long wave of Israeli-Palestinian violence is roiling the region.

The assailants carried out two separate attacks on the same day last November. One stabbed and killed two Israelis in a Tel Aviv office building. The other opened fire on cars in the West Bank, killing one Israeli, an American student and a Palestinian. Both attackers were apprehended.

Israel says home demolitions are an effective tool that can deter attacks but critics say the tactic amounts to collective punishment.

Israel says the violence is fueled by a Palestinian campaign of lies and incitement. The Palestinians says it is the result of frustrations stemming from nearly 50 years of occupation.

Also Tuesday, more than 30 former Israeli generals, ministers and other officials called for the division of Jerusalem, saying a wall should be erected between the Jewish and Arab sides of the city. In a full-page ad in the daily Yediot Aharonot, the group said Israel’s capture and annexation of those areas in the 1967 Mideast war was a “historic error.”

Jerusalem remains one of the most intractable issues of the Israeli-Palestinian conflict. Israel considers the city its eternal, undivided capital while Palestinians want the eastern sector as the capital of their hoped-for state.

Many of the attackers in the current wave of violence have come from Arab areas of the city.