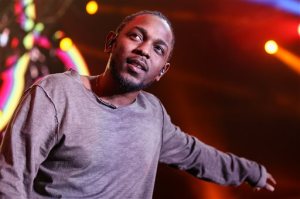 FILE – In this Dec. 4, 2015 file photo, Kendrick Lamar performs at Power 106’s ‘Cali Christmas’ 2015 in Inglewood, Calif. Lamar’s “To Pimp a Butterfly,” is nominated for a Grammy for album of the year. His song “Alright,” is also nominated for song of the year and best rap performance. (Photo by John Salangsang/Invision/AP, File)

NEW YORK (AP) — Kendrick Lamar has a chance to become the first rapper to win album of the year since Outkast took the prize in 2004 for “Speakerboxxx/The Love Below.”

He could also be the first rapper OF ALL-TIME — said in Kanye voice — to win song of the year.

But if you know The Recording Academy, you know that they often shade rappers when it comes to the top four categories, which include record of the year and best new artist.

Lamar is the leader with 11 nominations, and he’ll likely sweep the rap categories, but we’re predicting he won’t go home with the night’s biggest honors — especially with competition from his pal Taylor Swift, Ed Sheeran, Alabama Shakes and the Weeknd.

FEKADU: As a proud citizen of the land that belongs to King Kendrick, I believe he deserves to win — but that won’t happen. While Stapleton and Weeknd’s albums were impressive, they are not his problem here. Lamar and Swift will split some of the popular votes, which means Alabama Shakes could snag enough to win, and they will come close, but won’t beat “1989.” That album not only marked a transition — one of the most successful of all time — for Swift, but it sold tremendously well, launched seven hit singles and a massive, star-studded world tour — all while Swift took down Apple for not paying musicians and stood her ground against Spotify. Those musicians who aren’t paid, along with indie artists, will be throwing their support to her for album of the year. Tay Tay for the win.

MOODY: You would think with all those accomplishments, plus taking half the industry on tour with her, Taylor would be a lock. But even though her album is amazing and she was basically deified for battling streaming services, I think there are still folks who may feel — once again — it’s too soon to crown her with the honor when she won it in 2010. Plus, voters love to pick an act left of mainstream as often as possible — as long as it’s not rap (sorry Kendrick). That makes the battle between Stapleton and Alabama Shakes — and while both are Southern-based acts with electrifying stage shows, the Brittany Howard-fronted Alabama Shakes will win voters over.

MOODY: D’Angelo made a brilliant comeback album with “Black Messiah,” but let’s be honest: Virtually no one but die-hard fans and music critics know this song, which wasn’t even the album’s strongest. Can’t imagine it winning here. That leaves the hits that actually defined the year: While “Uptown Funk” deserves this badly, Grammy voters adore male singer-songwriters in the tradition of James Taylor and more recently, John Mayer, and Ed Sheeran has taken that mantle. “Thinking Out Loud” wins here.

FEKADU: You are right Nekesa — Sheeran will win here. BUT, for the sake of disagreeing, I am going to go with “Uptown Funk” just because I can’t stop reliving that Super Bowl halftime moment in my head. Bruno is epic.

FEKADU: Everyone has an undeniable crush on “Girl Crush” — including the Grammys. Sorry, King Kendrick.

MOODY: Have to agree here — “Girl Crush” represents a master class when it comes to songwriting. This is the song that your grandkids will be singing one day.

MOODY: Courtney Barnett is the Esperanza Spalding of this category: a singer-songwriter musician who’s eclectic, indie, and a critic’s darling — she even runs her own label. Though she’s not well known, she’s edgy, and Grammy voters are desperate to be among the cool kids. And that’s why she’ll take home the trophy, like Spalding did a few years ago.

FEKADU: Part of the problem is that most of the nominees here seem too new to win. That leaves us with Trainor and Hunt (though British critical darling Bay has a strong chance). But Hunt, who has successfully blended country music with R&B, pop and electronica, along with writing hit songs for his fellow countrymen, has moved mountains in his debut year, and it’s clear he’s only going to rise higher — especially with a win here.

FEKADU: Goulding is a talented singer, so it’s nice to see her get her first Grammy nomination. It’s hard to take Clarkson’s nomination seriously — love that girl — but this song is not worthy here. The Weeknd won’t win, which makes this the battle of the besties: Sheeran vs. Swift. Though “Blank Space” is a clever pop song, it’s hard to resist the emotion behind “Thinking Out Loud,” which will take the prize.

MOODY: Ummm, it’s not the song that wins, Mesfin — it’s performance! So Kelly’s voice alone makes her a contender — though not a serious one. That’s through no fault of her own: The competition is fierce here, so fierce even a megastar like Swift is unlikely to win over Sheeran, whose poignant, sweet and tender “Thinking Out Loud” will come out on top.

MOODY: Really hard to see how they could not award Alabama Shakes here. There was no better performance.

FEKADU: This is such a great list of R&B songs up for the prize! Too bad the Weeknd’s track was a mega-pop hit, so it easily wins.

MOODY: OK, this is showing how old-school I am — but I don’t know how The Weeknd wins over D’Angelo in any realm, or any of these young’uns (well, not Tyrese, but he doesn’t match up with D’Angelo on artistry anyway). Since D’Angelo isn’t going to take a mainstream category, he’ll get that much-deserved win here.

MOODY: There’s a part of me that says Grammy voters will see Paul McCartney in this category and blindly vote for “All Day,” the weakest song here. But I’m going to have faith — though there’s little evidence that I should — that the Recording Academy will do the right thing and award Lamar’s stirring anthem “Alright.”

FEKADU: Yes, they will see McCartney’s name and want to vote, but then they’ll wonder who the heck Theophilus London and Allan Kingdom are? That’s when they retrieve and select “Alright.” All right!

FEKADU: All five of these albums are amazing, but Hunt’s album is my favorite, and the only one to sell over one million units. But the newbie will have to take a backseat to another newbie — technically — who also writes songs for other artists. Stapleton wins here.

MOODY: Stapleton had this won when he rocked the Country Music Association Awards with Justin Timberlake last fall. Voters will have that performance in mind when they check off Stapleton’s name.