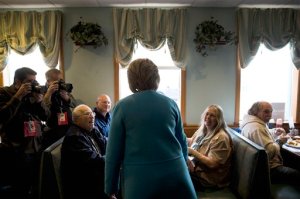 NASHUA, N.H. (AP) — They are some of Hillary Clinton’s best money-raisers, but right now the most valuable thing they can offer is their time.

So on a frigid weekend afternoon, Jill Iscol and Bonnier Berger set out as door-to-door saleswomen pitching a politician they deeply admire. Both are about the same age as Clinton, 68, and know her personally.

The well-to-do duo are among more than 50 donors called “Hillraisers” who deployed to help campaign staff and volunteers with last-minute voter canvassing ahead of the Tuesday, Feb 7, primary here that Clinton could lose to Democratic rival Bernie Sanders, a senator in a neighboring state.

Hillraisers have committed to “bundling” at least $50,000 from their social networks, making them a critical piece of a well-funded campaign that has already raised $130 million for her in the presidential race.

There is, the Hillraisers insist, passion for Clinton that matches what Sanders has generated in his surprisingly surging bid — a “revolution,” as he calls it. And these donors see it as their mission to spread Clinton mania to the masses.

“That there’s even a threat to Hillary Clinton not winning is frightening to me. She’s the most extraordinarily prepared, qualified person to become our next president,” said Iscol, who had also volunteered in Iowa. “Although I’ve raised money, and am a very effective fundraiser, I feel that I have a responsibility to be out helping.”

Iscol, a New Yorker, and Berger, who’d driven up from Boston, acknowledged being a bit out of their comfort zone as they traipsed through places unknown. Still, they reveled in the assignment, hugging and cajoling would-be voters for hours on end.

Campaign staffers had given them sheets of voter information and a suggested pitch that focused on Clinton’s record. Their assignment was to complete forms marking people as committed, leaner or undecided voters, among other designations.

At one of Iscol and Berger’s first stops, in a neighborhood where homes are for sale in the mid-$200,000s, the man who answered the door wasn’t on their target list — his wife was — but the two couldn’t help but try to win him over anyway.

He said both Democratic candidates were great on the issues he cares about as a postal worker, but Bernie a bit more so.

“I really respect where you’re coming from,” Iscol said. “But Bernie is just a phenomenon, and what we really need is Hillary. There is so much at stake.”

“I do think she has a better chance of winning the nomination,” the man said, seeking common ground. He added that his wife was likely to go for Clinton, although she couldn’t come to the door.

Four homes down, a woman smiled when Berger and Iscol said they were “here for Hillary.”

She told them she’d be putting up a sign in her yard, prompting Berger and Iscol to hop up and down on the porch and cheer. “You made my day,” Berger said.

At another house, they swapped stories about their grandchildren with a woman out shoveling the stubborn patches of ice and snow on her driveway. The woman said her husband, who’d died a few months ago, had been a fan of the former first lady and secretary of state. Their chat ended in a group hug and another commitment to vote for Clinton.

A 30-minute drive to the east, still more donors had fanned across Salem.

Dan Kessler, a 26-year-old Philadelphia-based Clinton money-bundler, said his interactions with voters there left him overflowing with optimism about Clinton’s prospects on Tuesday. Sanders has held double-digit leads over Clinton in most recent New Hampshire polls.

“Some people might say, oh, you’re raising money for her — that’s enough. But I don’t feel like it’s enough,” he said. “My enthusiasm for her is so strong that I have to do more.”

Another donor, Dawn Smalls, had driven north from New York City in bad weather on Friday with her 4-year-old with her to canvass in Nashua. “It was a lesson to her that democracy is not a spectator sport, and that some things are worth driving seven hours in a snowstorm for,” she said.

Smalls, a lawyer, tested out her closing argument skills when she tried to persuade a Sanders-leaning Democrat to vote for Clinton.

She made the case that Clinton is strong, like Sanders, on issues such as income inequality, but is set apart from him in a crucial way: “It’s extra great to have concept and principle, but we need someone who can get something done.”

The man withheld his final verdict, but Smalls said later, “He thanked us. Hopefully that conversation made a difference.”

The donors said time spent door-knocking also will help them with buck-raising later, since they’d be able to share with would-be donors fresh stories about the Clinton operation in action.