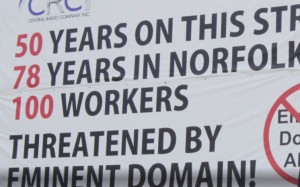 Central Radio placed a large protest banner on the side of the very building the government was trying to take in May 2012. The banner read: “50 years on this street/78 years in Norfolk/100 workers/Threatened by eminent domain!”
The city of Norfolk immediately ordered Central Radio to remove the protest banner because it violated the city’s sign code.

Arlington, Va.—Jan. 29, the 4th U.S. Circuit Court of Appeals declared that the city of Norfolk, Virginia, violated the free speech rights of a small business after the city suppressed the business’s banner protesting the government’s unlawful attempt to seize its property by eminent domain. The decision culminates Central Radio Company’s almost four-year legal battle with the city that made national news several times and even made its way to the U.S. Supreme Court.

“This is a tremendous victory not only for free speech, but also for property rights,” said Michael Bindas, senior attorney with the Institute for Justice (“IJ”) which represents Central Radio. “The 4th Circuit’s decision demonstrates how protecting free speech is essential to the preservation of our other rights and liberties, including property rights.”

“Justice has been served, finally,” said Bob Wilson, one of Central Radio’s owners. “The 4th Circuit, at the direction of the U.S. Supreme Court, did the right thing by recognizing that the city of Norfolk violated our rights. It is every citizen’s duty to protest against the government when it does wrong.”

This legal fight began when the government tried to take Central Radio’s property (a seizure the Virginia Supreme Court would later hold unlawful). In response to the attempt, Central Radio placed a large protest banner on the side of the very building the government was trying to take in May 2012. The banner read: “50 years on this street/78 years in Norfolk/100 workers/Threatened by eminent domain!”

The city of Norfolk immediately ordered Central Radio to remove the protest banner because it violated the city’s sign code. Yet a banner of the same size, in the same location, would have been perfectly permissible under the code if, rather than protesting city policy, it depicted the city flag or crest—or, for that matter, a religious emblem or a work of art.

The victory comes after an almost four-year court battle. Central Radio filed a free speech lawsuit challenging the city’s sign code in May 2012. The U.S. District Court for the Eastern District of Virginia initially upheld the code. In January 2015, the 4th Circuit, over a vigorous dissent by Judge Roger Gregory, affirmed the district court.

“Today, the 4th Circuit has finally declared that the government does not get to play favorites with the First Amendment by arbitrarily deciding who gets to speak and what they get to say,” said Erica Smith, another IJ attorney representing Central Radio.

“This 4th Circuit ruling should be a wakeup call to cities around the nation that they must reform their sign codes to protect speech and treat signs equally no matter what they say,” said IJ Attorney Robert Frommer, who is also part of the Central Radio’s litigation team. “The key is not more regulation, but less.”

Founded in 1991, the Institute for Justice is the national law firm for liberty. To learn more about this case, visit http://www.ij.org/central-radio-company-v-city-of-norfolk.