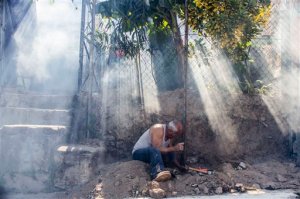 A man works on a fence amidst a cloud of insecticide as city workers fumigate to combat the Aedes Aegypti mosquitoes that transmits the Zika virus, at the San Judas Community in San Salvador, El Salvador, Tuesday, Jan. 26, 2016. Worries about the rapid spread of Zika through the hemisphere has prompted officials in El Salvador, Colombia and Brazil to suggest women stop getting pregnant until the crisis has passed. (AP Photo/Salvador Melendez)

RIO DE JANEIRO (AP) — The latest on the fight against the Zika virus that health officials suspect is linked to a wave of birth defects in Brazil. (All times local):

Venezuela’s medical community is demanding the government publish statistics about infections by the Zika virus and warning it could already be alarmingly widespread.

Venezuela’s Ministry of Health has so far only confirmed the presence of the mosquito-borne illness in the country bordering Brazil, where Zika is suspected of causing birth defects.

The ministry stopped publishing data on all epidemic diseases a year ago.

Former Health Minister Jose Felix Oletta says it is unacceptable that the government has waited so long to release Zika statistics and begin working to contain the virus.

Francisco Jorge tells public broadcaster RTP there’s one other “very probable” but unconfirmed case of a Portuguese who recently visited Colombia. All are adults, he said, without providing further details.

European officials have said they expect to see cases of the Zika virus among travelers, but say local transmission is unlikely.

Ugandan researchers say the mosquito-transmitted Zika virus is not considered a threat in the African country where it was first discovered in a monkey in 1947.

Virologist Julius Lutwama with the Uganda Virus Research Institute said Wednesday there has never been a known outbreak in Uganda, though a few samples have tested positive over the years.

He says Zika is “not a very important disease” on a continent where malaria, also transmitted by mosquitoes, is the major killer.

Zika virus is named for a forest just outside Uganda’s capital, Kampala, where it was first identified.

Danish hospital officials say a Danish tourist has been infected by the Zika virus after visiting southern and central America.

The Aarhus University Hospital says the patient ran a fever, had a headache and muscle aches and was discovered as having the virus on Tuesday.

There hospital released no further details about the patient but it says that there is little risk of it spreading in Denmark because the mosquito carrying the virus isn’t found in the country.

Romit Jain from the European Centre for Disease Prevention and Control in Stockholm says there have been confirmed cases of imported Zika virus infections in Germany and Britain.