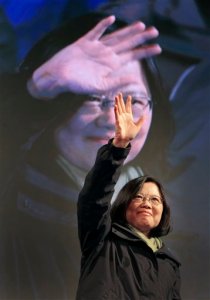 TAIPEI, Taiwan (AP) — Taiwan’s presidential election victor Tsai Ying-wen will enjoy a broad mandate from her commanding victory and her independence-leaning party’s new legislative majority, but managing the island’s delicate relations with China will be tricky.

Already, Beijing warned following her Saturday, Jan. 16, night victory that it will not budge on its bottom line that Taiwan’s leader must agree that the communist mainland and self-governing island democracy are part of a single Chinese nation. The sides could be in for a lengthy wait as China assesses whether it feels it can trust Tsai.

Tsai, who will be Taiwan’s first female president, won by 56 percent of the vote to 31 percent for her closest rival Eric Chu of the China-friendly Nationalist Party, which has held the presidency for the last eight years. Her Democratic Progressive Party won 68 of 113 parliamentary seats, giving it its first majority in the assembly long-dominated by the Nationalists.

“I wasn’t surprised a bit by the outcome. The Nationalists had to go. Now Tsai just needs to focus on the economy so I don’t expect she’ll do anything to rile up China,” Taipei tour bus driver Tan Kuang-jung said as a constant drizzle fell over the capital Sunday.

The reasons for the massive win were many.

Outgoing President Ma Ying-jeou had been growing increasingly unpopular among Taiwan’s 23 million people, largely due to perceptions that his push for closer economic ties with China was benefiting just a few and the futures of young Taiwanese who have seen wages stagnate and good full-time jobs harder to find.

Fearful of their original candidate’s poor reception among voters, the Nationalists dumped her in favor of Chu, but even he proved unable to raise their prospects. He resigned as party chairman immediately after Saturday’s defeat.

Newly politicized young people had coalesced in opposing yet another trade agreement with China and are believed to have voted heavily for the DPP.

A further backlash against the party’s pro-China stance was prompted by a viral video of 16-year-old Taiwanese entertainer Chou Tzu-yu bowing in apology for waiving the Taiwanese flag on television. Her apology was triggered by her South Korean management company’s fears that China would cancel appearances and endorsement deals.

“What happened surrounding Chou Tzu-yu, that whole controversy, made it almost a given (Tsai) would get over the 50 percent mark,” said Raymond Wu, managing director of Taipei-based political risk consultancy e-telligence.

“It’s an indication that someone would continue to bully Taiwan, at all different levels, even a 16-year-old who’s trying to make a name for herself in the entertainment field. This is something most Taiwanese find unacceptable,” Chou said.

The size of the win could also put additional pressure on Tsai and the DPP, said Larry Diamond, a senior fellow at the Hoover Institution who closely follows Taiwanese politics.

“When you do as well, as decisively as the DPP has done, there are no excuses” for failure, Diamond said.

While China had largely refrained on commenting about the election beforehand, its Taiwan Affairs Office responded swiftly to the result with a statement reiterating that it would deal only with those who agree that the “two sides of the strait belong to one China.”

That was followed by another statement from the Foreign Ministry stating that “China’s sovereignty and territorial integrity brook no division. The result of the election in Taiwan will not change the basic fact and the consensus of the international community.”

“On such a major issue as safeguarding state sovereignty and territorial integrity, the Chinese government has rock-solid determination and never tolerates any separatist activities aiming at ‘Taiwan independence,'” said the statement, quoting ministry spokesman Hong Lei.

Taiwan was a Japanese colony from 1895 to 1945, and split from the mainland amid the Chinese civil war in 1949, when leader Chiang Kai-shek moved his Nationalist government to the island.

Reflecting public opinion on Taiwan and mindful of U.S. and other countries’ concerns about cross-strait tensions, Tsai has pledged to maintain the status-quo of de-facto independence without taking steps that might provoke China. In her remarks Saturday, she referred to Taiwan by its formal name, the Republic of China.

However, unlike Ma, she has refused to endorse Beijing’s “one China principle” — although she hasn’t publicly repudiated it either — and told supporters Saturday night that she would work to strengthen Taiwan’s status abroad.

Deprived of formal diplomatic relations with the world’s major nations, Taiwan relies on its stable of 22 allies, mostly small, poor states in the Pacific, Africa and Central America and the Caribbean. Chinese pressure has barred Taiwan from the United Nations and Beijing strictly limits the island’s participation in other groups or requires it to participate only under the name Chinese Taipei.

Depending on how it interprets Tsai’s actions, Beijing could ratchet up the pressure by luring away Taiwan’s remaining diplomatic allies or further shutting it out of international organizations. It could also seek to exact economic costs, possibly by limiting Chinese tourism to the island or reducing Taiwanese imports.

Far less likely is that it would resort to military intimidation despite its threat to invade if Taiwan opts for a formal declaration of independence. Although such tough talk plays well with the Chinese public, past attempts have backfired by generating even more support for pro-independence politicians.

Most probably, Beijing will observe what Tsai does and says before she takes office in May.

“I think the tough will get tougher and the soft will get softer. Certainly they’re going to see from now till inauguration what Tsai says and who she puts in key offices,” Wu said.