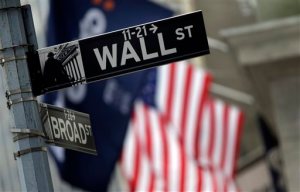 FILE – This Oct. 2, 2014 file photo shows a Wall Street sign adjacent to the New York Stock Exchange, in New York. European shares shed earlier gains Thursday, Dec. 3, 2015 after the European Central Bank failed to cut a key interest rate as much as many in the markets had expected. (AP Photo/Richard Drew, File)

ECB EXPECTATIONS: Markets had been anticipating strong action from the European Central Bank in the run-up to its policy announcement Thursday. Expectations were high after ECB chief Mario Draghi signaled the bank would act decisively to keep the 19 countries that use the euro from falling into deflation or an economic contraction. However, the ECB disappointed investors by cutting a key interest rate less than expected and not stepping up monthly bond purchases as expected, in a program known as quantitative easing, or QE.

MARKET INSIGHT: “Mr. Draghi took out his bazooka yesterday and fired it into his own foot,” said Michael Every, head of Asia-Pacific financial market research at Rabobank. Following the ECB’s decision to hold off raising bond purchases, “the severe market reaction underlines that in the ‘new normal’, no good deed goes unpunished. By trying to avoid exacerbating currency wars with more QE, the ECB has merely become a victim rather than a victor.”

ENERGY: Oil futures rose on the weaker dollar. Benchmark U.S. crude was up 28 cents to $41.36 a barrel in electronic trading on the New York Mercantile Exchange. The contract jumped $1.14, or 2.9 percent, to close at $41.08 a barrel on Thursday in New York. Brent crude, which is used to set prices for international oils, climbed 25 cents to $44.09 a barrel in London.