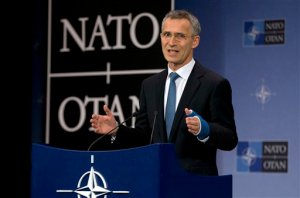 NATO Secretary General Jens Stoltenberg speaks during a media conference at NATO headquarters in Brussels on Tuesday, Dec. 1, 2015. U.S. Secretary of State John Kerry and other NATO foreign ministers met Tuesday to discuss Russia, beefing up the alliance’s southern defenses and whether to expand NATO by adding Montenegro to the NATO Alliance. (AP Photo/Virginia Mayo)

BRUSSELS (AP) â The United States and its NATO allies struggled Tuesday to come up with a clear message to send Russia at a time of conflicting concerns in Europe and the Middle East.

While the West remains alarmed by Moscow’s aggressive action in Ukraine and go-it-alone military efforts in Syria, they say they need Russian help in both places.

Meeting in Brussels, which just emerged from a virtual lockdown prompted by terror threats, U.S. Secretary of State John Kerry and other top diplomats discussed ways to intensify the campaign in Syria against Islamic State extremists and calm tensions between Turkey and Russia after Ankara shot down a Russian warplane that it believed crossed its border.

The meetings took place as Germany approved plans to commit up to 1,200 soldiers for non-combat roles in support of the anti-IS coalition and a day before a British vote on expanding airstrikes against the group. In Paris, U.S. President Barack Obama voiced optimism about Russia eventually dropping its support for Bashar Assad, Syria’s leader, and helping to end the war.

The 4Â½-year conflict has killed more than 300,000 people and sparked the worst refugee crisis in Europe since World War II.

But for all the hopes of greater cooperation, there were countless reminders of the tensions between NATO and Russia, the land it was originally created to counter. Russia wasn’t present for any of the talks at the alliance’s headquarters outside the Belgian capital.

Kerry and Polish Foreign Minister Witold Waszczykowski discussed a recent uptick in violence in eastern Ukraine and stressed the need for the government, rebels and the Kremlin to fully implement a February ceasefire agreement. They also agreed that “international sanctions against Russia should stay in place,” State Department spokesman John Kirby said.

Russia annexed the Ukrainian province of Crimea in 2014 and has been supporting rebels fighting the government in the eastern half of the country.

In the wider meeting, NATO countries prepared to welcome Montenegro as the military alliance’s 29th member, despite Moscow’s warning of retaliation against the small Balkan nation, which is hundreds of miles away from Russia’s border.

Meanwhile, Turkey worked to build broader support for its Nov. 24 decision to shoot down a Russian warplane that Ankara and Washington say violated Turkish airspace, and NATO’s secretary-general, Jens Stoltenberg, raised the possibility of reworking decades-old guidelines for coordination among rival militaries.

Nowhere are the stakes higher than in Syria, where Western countries are ambivalent about securing Moscow’s assistance in rooting out the Islamic State from its centers of operations.

France, where 130 people died last month in the Islamic State’s biggest Western attack to date, is among those pushing for closer military cooperation with Russia. The United States says that cannot happen while Russia is shoring up the Assad’s rule by targeting U.S.-backed and Arab-backed rebels more so than IS and other extremists.

But as in Ukraine, Washington is banking on Russia’s support in diplomatic efforts. The former Cold War foes have been working for months to get Syria’s government and moderate opposition forces into direct negotiations, which they hope to start in the next few weeks.

Obama said he believed a Russian “shift in calculation” was possible.

But, he added: “I don’t expect that you’re going to see a 180 turn on their strategy over the next several weeks. They have invested, for years now, in keeping Assad in power. Their presence there is predicated on propping him up, and so that’s going to take some time for them to change.”

At least one question regarding the relationship with Russia is expected to be clarified by the time the NATO foreign ministers’ meeting concludes on Wednesday, according to diplomats: Montenegro’s request to join NATO.

Its accession would likely be finalized at the alliance’s summit in Warsaw next year, making it the first NATO expansion since taking in Albania and Croatia in 2009.

Last week, Russian Foreign Ministry spokeswoman Maria Zakharova said starting the process with Montenegro would be “another serious blow” to international security and deemed it “confrontational.” Russian lawmakers have raised the possibility of trade and other penalties against the country in response.