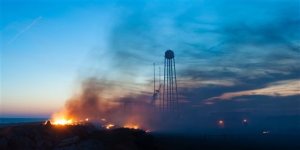 This Tuesday Oct 28, 2014 photo provided by NASA shows the launch pad on fire after the Orbital Antares rocket suffered a catastrophic anomaly moments after launch at NASAs Wallops Flight Facility in Virginia. The Cygnus spacecraft was filled with supplies slated for the International Space Station, including science experiments, experiment hardware, spare parts, and crew provisions. (Joel Kowsky/NASA via AP)

BERLIN (AP) — The European Space Agency is postponing the launch of probe that will test technology for a future mission to measure gravitational waves.

The agency said Tuesday that a technical problem has been discovered in the Vega rocket that was due to lift the probe into orbit Wednesday. Engineers are working on fixing the problem and the launch from French Guiana may take place Thursday.

If it succeeds, the agency plans to launch a follow-up mission in 2034 that could measure ripples in space-time caused by black holes and other massive objects lurking unseen in dark corners of the galaxy.