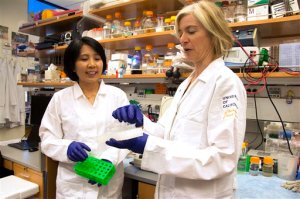 In this photo provided by UC Berkeley Public Affairs, taken June 20, 2014, Jennifer Doudna, right, and her lab manager, Kai Hong, work in her laboratory in Berkeley, Calif. Designer babies or an end to intractable illnesses: A revolutionary technology is letting scientists learn to rewrite the genetic code, aiming to alter DNA in ways that, among other things, could erase disease-causing genes. How far should these experiments try to go _ fix only the sick, or make changes that future generations could inherit? (Cailey Cotner/UC Berkeley via AP)

Designer babies or an end to intractable illnesses: A revolutionary technology is letting scientists learn to rewrite the genetic code, aiming to alter DNA in ways that, among other things, could erase disease-causing genes.

How far should these experiments try to go _ fix only the sick, or make changes that future generations could inherit?

Hundreds of scientists and ethicists from around the world gather in Washington this week to debate the boundaries of human genome editing, sort of a biological cut-and-paste tool that allows researchers to spot a gene defect inside living cells and swap it out.

It’s all experimental so far, but the promise for new treatments is huge. The ethical quandary: Should it also be attempted in human embryos, altering a gene in not just one person but his or her descendants? Already, China has reported the first laboratory experiment with embryos to start learning how.

“This is really a decision that will affect us all,” said Marcy Darnovsky of the Center for Genetics and Society advocacy group, who opposes heritable gene editing. She called it potentially a “society-altering technology.”

But pioneer Jennifer Doudna of the University of California, Berkeley, warns that a ban on even basic gene editing research in embryos could block important discoveries. Writing in the journal Nature, she urged scientists to find âan appropriate middle ground.â

Here’s a look at the science and the controversy, on the eve of the international summit hosted by the U.S. National Academies of Science and Medicine.

WHAT IS GENE EDITING

While scientists have long been able to find defective genes, fixing them has been so cumbersome that itâs slowed development of genetic therapies. With gene editing, scientists home in on a piece of DNA and use molecular tools that act as scissors to snip that spot _ deleting a defective gene, repairing it or replacing it.

There are some older methods but a new tool called CRISPR-Cas9 has been adopted by laboratories worldwide because it’s faster, cheaper, simple enough to use with minimal training, and allows altering of multiple genes simultaneously.

The biggest use so far is to rapidly engineer animals with human-like disorders for basic research, but promising gene-editing experiments make regular headlines.

Much like a bone marrow transplant, researchers hope to use CRISPR for diseases like sickle cell, correcting the faulty gene in someone’s own blood-producing cells rather than implanting donated ones.

Similarly, doctors in Britain recently treated a 1-year-old with leukemia using donated immune cells that had been experimentally altered with an older editing method to target her cancer. A California company is testing a non-CRISPR way to make HIV patients’ immune cells better resist the virus.

The University of Massachusetts just reported using a CRISPR technique to switch off, rather than cut and repair, a gene in muscle cells that causes one form of muscular dystrophy.

And Harvard researchers recently edited 62 spots in pig DNA, part of work to use the animals to grow organs for human transplant.

Safety is a key question because gene editing isn’t always precise enough; thereâs the possibility of accidentally cutting DNA that’s similar to the real target. Out-of-body treatments like altering blood cells gets around the fear of fixing one problem only to spark another, and efforts to improve precision are under way.

Altering genes in sperm, eggs or embryos can spread those changes to future generations, so-called germline engineering that might one day stop parents from passing inherited diseases to their children.

Chinese scientists reported the first-known attempt to edit human embryos last spring, working with leftovers from fertility clinics that never could have developed into fetuses. They aimed to correct a deadly inherited gene, but uncovered problems that will require more research.

Germline engineering “has been viewed almost universally as a line that should not be crossed,” National Institutes of Health Director Francis Collins said at the time.

After all, future generations couldn’t consent, and any long-term negative effects might not become apparent for years. There’s also concern about babies designed for better intellect, athleticism or appearance rather than to prevent disease.

Thereâs wide agreement that the technique isnât safe enough yet to attempt a pregnancy with an altered embryo. But there are other kinds of germline research. In Britain, for example, researchers have requested permission to gene-edit human embryos in the lab, studying early development in ways that might shed light on miscarriage.

Where you live determines if, or what kind of, research can be performed on embryos. Some countries, especially in Europe, ban germline research. Others, such as China, have guidelines described as unenforceable. Britain allows basic lab research only.

In the U.S., the NIH won’t fund research involving germline editing but private funding is allowed.

Human gene editing aside, there are environmental concerns, too. Experiments are under way to force genetic changes to spread rapidly through populations of animals and plants _ changes that could wipe out invasive species or disease-carrying insects. A California team reported a first step last week, hatching malaria-resistant mosquitoes that could easily spread their new protective gene to their offspring.