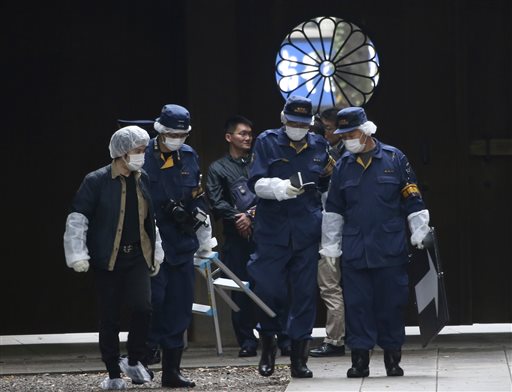 Police officers investigate the compound of Yasukuni shrine following an explosion in its public restroom in Tokyo, Monday, Nov. 23, 2015. Japanese media reporting an explosion at the shrine, which honors Japan’s war dead, including those executed as war criminals. No one was injured. (AP Photo/Koji Sasahara)

TOKYO (AP) — An explosion Monday damaged a public restroom at a controversial shrine in Tokyo that honors Japanese war dead, with police suspecting foul play. No one was injured.

The Yasukuni shrine, which honors 2.5 million Japanese war dead, including executed war criminals, has been the target of criticism from China and South Korea, which suffered from Japan’s World War II atrocities and aggression.

Tokyo police said in a statement that they received a call about an explosion and smoke at Yasukuni. They said they suspected a “guerrilla” attack, implying some kind of subversive activity, but declined to elaborate.

Firefighters were also called to the scene and found the ceiling and walls of the restroom had been damaged, said an official at the Tokyo Fire Department, who spoke on condition of anonymity. But the fire was out by the time they arrived.

It was unclear what caused the explosion, but a timing device and wirings were found near the spot of the explosion, according to Kyodo News service. Police will be reviewing footage on security cameras for clues, TBS TV news said. Footage on TV Asahi showed a bomb squad in protective gear entering the shrine premises.

The person in charge of media at Yasukuni was not immediately available for comment.

The shrine is a focal point for lingering tensions with Japan’s neighbors over the country’s aggression before and during World War II. Some Japanese lawmakers have insisted on making official visits in the name of patriotism, while other lawmakers say such visits glorify Japan’s historical mistakes.

While views on the shrine have divided the Japanese public, it holds emotional significance for some because during the war soldiers promised each other they would reunite at Yasukuni if they died.

The shrine has a grandiose gate, giant cherry trees and a museum that pays homage to those who died in Japan’s wars, including kamikaze pilots.

Many families and tourists visit Yasukuni. Monday was a national holiday, and shrine officials said the grounds remained open for the rest of the day.

Her work can be found at http://bigstory.ap.org/content/yuri-kageyama