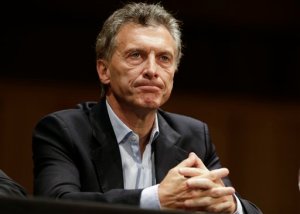 Macri, fresh off his historic election win late Sunday, began laying out how he would achieve some of the promises that helped him put an end to 12 years of “Kirchnerismo,” a movement aligned with the poor led by Fernandez and her late husband and predecessor, Nestor Kirchner.

Macri, the outgoing mayor of Buenos Aires who will assume the presidency Dec. 10, said a key task is just spelling out the true nature of problems such as 30 percent inflation and government spending that many private economists warn is not sustainable.

“Argentina today doesn’t have credible information on the economy,” said Macri, criticizing the Fernandez administration for widely discredited statistics on everything from inflation to poverty rates. “We need to know the real state of public accounts.”

Macri said that instead of a single economy minister, he would build a cabinet with six ministers assigned to specific areas of the economy.

Such a structure is in line with Macri’s technocratic approach, which emphasizes decisions based on data analysis and efficiency over style. It also cuts a sharp contrast with Economic Minister Axel Kicillof, a top official in the Fernandez administration who wielded enormous power over key policies, such as the decision not to negotiate with a group of creditors in the U.S. that took Argentina to court in New York and won.

Macri reiterated his promise to lift unpopular restrictions on buying U.S. dollars and thus eliminate a booming black market for foreign currencies that creates distortions in the economy. He said the restrictions were an error that impeded growth, but did not provide details on his next steps to address the system.

Lifting restrictions would likely lead to a sharp devaluation of the Argentine peso, which officially trades at 9.5 to the U.S. dollar but on the black market is around 16 pesos.

With foreign reserves around $26 billion, low for such a large economy, Macri’s administration would need a quick infusion of dollars to keep the government afloat and meet the demand of Argentines looking to trade their pesos.

That could come from many different international economic bodies, but ultimately would require some fast reforms to signal that structural changes to the economy are forthcoming.

Macri will also likely encounter fierce resistance in Congress, where he doesn’t have majorities in either chamber. The makeup of Congress, filled with many Fernandez loyalists including her son, is particularly important for the long-standing debt spat with a group of creditors in the U.S.

By law, Congress has to approve any measures regarding the country’s debt. The Fernandez administration refused to negotiate despite repeated rulings by a U.S. federal court judge against Argentina, a stance that ultimately kept the South American nation from accessing international credit markets.

The close finish in Sunday’s historic runoff — Macri got 51.4 percent of the vote compared to 48.6 percent for Scioli — will embolden ruling party stalwarts to question his moves.

“It was practically a tie,” said Fernandez’s Cabinet chief Anibal Fernandez, adding that the ruling party “will be preparing to return to power.”

Macri’s own background and the bruising campaign could feed into Argentina’s political polarization after more than a decade of left-leaning government.

He hails from one of the country’s most prominent families and rose to fame as president of the popular Boca Juniors soccer club.

Ruling party candidate Daniel Scioli frequently attacked Macri, saying he would subject this nation of 41 million people to the market-driven policies of the 1990s, a period of deregulation that many Argentines believe set the stage for the financial meltdown of 2001-2002.

Despite the challenges, Macri’s win signals a clear end to the era of Fernandez and her late husband. During their years in office, the power couple gained both popularity and sharp criticism by spending heavily on programs for the poor, raising tariffs to protect local economies and increasing government involvement in all walks of life — much of which Macri wants to roll back.

Macri has also made clear that he’ll break from some of the previous administration’s alliances, such as its close relationship with Venezuela.

On Monday, he reiterated his promise to push to expel Venezuela from the South American trade bloc known as Mercosur because of the jailing of opposition leaders. That would be a huge change for a continent where many countries, including neighbors Chile, Brazil and Bolivia, have left-leaning democratic governments that have maintained close ties with Venezuela.

As if to emphasis his commitment, during his victory celebration Sunday night, Macri took a picture with Lilian Tintori, the wife of Leopoldo Lopez, an opposition leader in Venezuela who has been jailed since early last year.

Peter Prengaman on Twitter: http://twitter.com/peterprengaman His stories can be found at:http://bigstory.ap.org/search/site/Peter%20Prengaman .