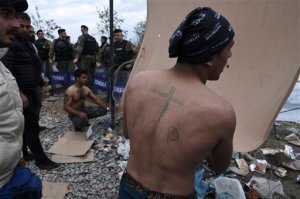 Migrants raise a banner as they demand to be allowed to cross the border to Macedonia, as Macedonian policemen stand guard, near the Greek village of Idomeni, Sunday, Nov. 22, 2015. About 1,300 migrants gathered in the Greek town Idomeni protested Saturday against the decision by Macedonian authorities across the border to turn away migrants who are not from war zones such as Syria, Afghanistan and Iraq. (AP Photo/Giannis Papanikos)

IDOMENI, Greece (AP) — Migrants barred from crossing the Greece-Macedonia border held a fourth day of protests Sunday, as Macedonia’s president criticized the European Union over the refugee crisis for a lack of financial support and data sharing.

The influx of migrants into Macedonia has heightened tensions in the country, President Gjorgje Ivanov said.

“The risk of possible conflict between refugees and migrants, the migrants and police and army, and between migrants and local people is rated as high,” Ivanov told reporters Sunday after meeting with visiting European Council president Donald Tusk in Macedonia’s capital, Skopje.

Several European countries, including EU members Slovenia and Croatia and non-members Serbia and Macedonia, have declared they will only allow “war-zone refugees” from Afghanistan, Iraq and Syria to transit through their countries on their way to central and northern Europe.

This policy has left many others stranded in the Greek border town for four days, demanding to be let in and chanting slogans such as “Freedom!” and “We are not terrorists.”

On Sunday, an Iranian man threatened to cut his wrists with a razor if not allowed into Macedonia. Police intervened to disarm him, but, in the scuffle, he cut his face.

The number of migrants being barred from entering Macedonia has fallen significantly Sunday, from more than 2,000 to around 1,300 in the early evening. Many of them took buses and taxis to Athens and Thessaloniki. Greek police believe they may be trying to find other routes, including with the help of smugglers.

Ivanov also said that Macedonia has the capacity to shelter about 2,000 people in its temporary transit centers.

“Any increase in these numbers will increase permanent and direct threats and risks for the national security of Macedonia,” he added.

A total of 6,000 refugees crossed into Macedonia from early Saturday through early Sunday, police say. About 500,000 refugees have transited through Macedonia in 2015.