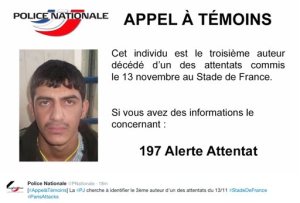 RETRANSMISSION TO CLARIFY POLICE ARE SEEKING INFO ABOUT THIS DEAD SUICIDE BOMBER – This notice released Sunday, Nov. 22, 2015, by the French Police shows a call for witnesses and an undated portrait of an unidentified suicide bomber in connection with recent terror attacks in Paris, as police investigations continue. The notice, released on the national police Twitter account, reads in French: “Call for witnesses – this unidentified individual is the third attacker who died at the Stade de France. Please call if you have any information”. (Police Nationale via AP)

BRUSSELS (AP) — With hundreds of troops patrolling Brussels for a second day and authorities hunting one or more suspected militants, the Belgian government chose Sunday to keep the capital on the highest state of alert into the start of the workweek to prevent a Paris-style attack.

Citing a “serious and imminent” threat, Prime Minister Charles Michel announced that schools and universities in Brussels will be closed Monday, with the subway remaining shut down, preventing a return to normal in the city that is also home to the European Union’s main institutions.

“We fear an attack like in Paris, with several individuals, perhaps in several places,” Michel said after chairing a meeting of Belgium’s National Security Council.

While Brussels was kept on the highest of four alert levels, the rest of the country remains on a Level 3 alert, meaning an attack is “possible and likely.”

“Nobody is pleased with such a situation. Neither are we. But we have to take our responsibility,” Michel said.

A series of police raids in central Brussels ended late Sunday, a government official said, speaking on condition of anonymity because the overall investigation was still ongoing.

The situation was tense Sunday night in the wider area around the Grand Place, with police out in force as several raids looking for suspects were carried out. At one point, security forces closed off streets and yelled at people to stay away.

It was still unclear what results the raids had yielded. Prosecutors scheduled a news conference for just after midnight.

Western leaders stepped up the rhetoric against the Islamic State group, which has claimed responsibility for the attacks in Paris that killed 130 people and wounded hundreds more; the suicide bombings in Beirut that killed 43 people and injured more than 200; and the downing of the Russian jetliner carrying 224 people in Egypt’s Sinai Peninsula. All happened within the past month.

“We will not accept the idea that terrorist assaults on restaurants and theaters and hotels are the new normal, or that we are powerless to stop them,” President Barack Obama said in Kuala Lumpur, Malaysia.

French Defense Minister Jean-Yves Le Drian said IS must be destroyed at all costs. “We must annihilate Islamic State worldwide … and we must destroy Islamic State on its own territory,” Le Drian said. “That’s the only possible direction.”

The decision to put Brussels on the highest alert came early Saturday as authorities frantically searched for Salah Abdeslam, who is believed to have played a key role in the Nov. 13 attacks in France. He is known to have crossed into Belgium the day after the attacks.

Interior Minister Jan Jambon warned that the threat wouldn’t necessarily disappear if Abdeslam was found, because they are looking for several people in connection with a possible planned attack in Brussels.

“The terror threat is wider than just that person,” Jambon said. “We are looking at several things. That is why we are making the big show of power and following everything up by the minute. It’s of no use to hide this.”

Several of the Paris attackers had lived in Brussels, including Abdelhamid Abaaoud, the plot’s orchestrator who was killed Wednesday in a standoff with French police.

Abdeslam is known to have crossed into Belgium on Nov. 14. His brother, Mohamed Abdeslam, went on Belgian TV and urged him to surrender, saying he would rather see him “in prison than in a cemetery.”

Authorities in Turkey said Saturday that a 26-year-old Belgian citizen suspected of being linked to Islamic extremists and possibly to the Paris attacks had been detained in the coastal city of Antalya.

France has intensified its aerial bombing in Syria and Le Drian said the aircraft carrier Charles de Gaulle, which has been sent to the Mediterranean to help combat IS militants in Syria, will be “operational” from Monday and “ready to act.”

Also Monday, French President Francois Hollande is scheduled to meet in Paris with British Prime Minister David Cameron and will travel to Washington and Moscow later in the week to push for a stronger international coalition against IS. Cameron is expected to outline his plan for combating the militants as he seeks parliamentary approval to join France, the U.S. and Russia in striking the group’s strongholds in Syria.

Russia also is trumpeting action it’s taking to fight IS. It has intensified its airstrikes in Syria in response to the Oct. 31 downing of its passenger plane in Egypt.

On Sunday, Russian law enforcement officers raided a militant hideout in the North Caucasus, killing 11 in an exchange of fire. The militants were part of a group whose members had pledged allegiance to IS, the National Anti-Terrorist Committee said in a statement.

Attacks like those in Paris are aimed partly at provoking the West, as the Islamic State group hopes that stepped-up military action in the region will reinforce its narrative of a clash of civilizations and attract more Muslims to its ranks. IS and other militant groups seize on harsh Western rhetoric and civilian deaths to portray themselves as defending Muslims from modern “Crusaders.”

In an effort to minimize possible targets, Belgian officials recommended that sports competitions and all activities in public buildings be canceled this weekend, and malls and commercial centers closed.

The security measures left Brussels eerily quiet, with streets deserted and many of the city’s famous beer bars and restaurants largely empty.

Residents were bracing for the impact that the continued clampdown would have on this city of more than 1 million as the workweek began.

“I can’t believe they are closing down the city. It is crazy but they must have a good reason,” said Josephine Lemmens, a physiotherapist.

Lemmens said she didn’t know what she would do with her 11-year-old son now that schools have been ordered closed, but she conceded the measures were justified if they prevented an attack like the one in Paris.

Restaurant worker Raphael Lungo said the decision to keep the subway idle would affect him most.

“This is really going to complicate my life. I take the metro very day and I don’t know what I will do tomorrow,” he said, voicing confidence that the emergency wouldn’t last too long. “Europe succeeded in beating the Nazis,” he said.

The European Union’s executive Commission decided to stay open for business but its vice president, Kristalina Georgieva, warned people to be vigilant and expect increased security checks. NATO also said it would be open Monday, with security measures increased.

In France, police issued a new appeal to identify the third attacker who was killed in the assault at the national stadium. They posted a photo of the man on Twitter, asking the public for information that would help identify him.

France has extended a state of emergency, which allows police raids, searches and house arrest without permission from a judge, for three months. On Saturday, it also extended a ban on demonstrations and other gatherings through Nov. 30, when a U.N. climate conference with more than 100 heads of state is scheduled to start.

In a sign of the nervousness in Paris since the attacks, some travelers at the Gare Du Nord station ran out of their trains Sunday after hearing noises they thought were gunshots but actually were caused by a pigeon being electrocuted on the tracks.