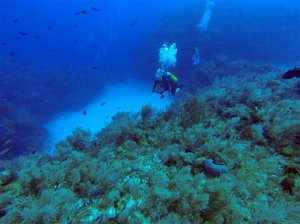 FILE – In this June 10, 2015 file photo, a diver makes an immersion at the International Diving Center Maria la Gorda on the Guanahacabibes peninsula in the province of Pinar del Rio, Cuba. The United States and Cuba signed an agreement Wednesday to join forces and protect the vast array of fish and corals they share as countries separated by just 90 miles (140 kilometers), the first environmental accord since announcing plans to renew diplomatic relations. (AP Photo/Chris Gillette, File)

HAVANA (AP) — The United States and Cuba signed an agreement Wednesday to join forces and protect the vast array of fish and corals they share as countries separated by just 90 miles (140 kilometers), the first environmental accord since announcing plans to renew diplomatic relations.

“We recognize we all share the same ocean and face the same challenges of understanding, managing, and conserving critical marine resources for future generations,” said Kathryn Sullivan, chief of the U.S. National Oceanic and Atmospheric Administration.

The memorandum signed by U.S. and Cuban officials in Havana directs scientists with the Florida Keys and the Texas Flower Garden Banks national sanctuaries to collaborate with researchers at two similarly fragile and protected reserves: Guanahacabibes National Park and the Banco de San Antonio, located on the island’s westernmost region.

Ocean currents carry many of the same fish and organisms off the coast of Cuba into the Gulf of Mexico and the Atlantic Ocean, making collaboration on topics like preservation and sustainability an area of mutual interest for scientists in both countries.

“Fish, marine mammals, sea turtles, birds and other marine life exist in ecosystems that rarely fall within maps drawn by man,” said Jonathan Jarvis, director of the U.S. National Park Service, which also signed the accord and will participate in the new exchange.

Washington and Havana announced last December that they would resume diplomatic ties, and formally did so in July.

Environmental cooperation has been one of the most visible areas of progress in the relationship as the United States and Cuba negotiate and discuss a number of issues. They include much thornier matters on which the two countries remain far apart, such as the U.S. embargo and the naval base at Guantanamo, as well as Cuba’s record on rights and democracy.

U.S. Secretary of State John Kerry announced in October that the countries were working on a marine-preservation accord. That same month, Cuba and the U.S.-based Environmental Defense Fund unveiled an initiative designed to protect shark populations, record fishing vessel catches and develop a long-term conservation plan. And in April, NOAA and Cuban scientists circled the island on a research cruise to study the larvae of bluefin tuna, a highly threatened and commercially valuable species.

“We trust this document marks the start of a sustainable process of exchange that lets us develop scientific investigations and share best practices in management and conservation,” Fernando Mario Gonzalez Bermudez, Cuba’s first vice minister of the Ministry of Science, Technology and Environment, said Wednesday.

Cuba’s marine ecosystem is considered one of the best preserved in the region, with large reserves of relatively untouched coral and large populations of fish, sharks and sea turtles. But such ecosystems could come under new threats as Cuba continues to search for offshore oil and tourism booms.

Billy Causey, a regional director with NOAA who helped broker the accord, said the pairings were determined in part by the challenges that the sanctuaries share.

Guanahacabibes National Park is one of Cuba’s largest and most isolated reserves. It is home to a large population of sea turtles, spiny lobsters and contains what is considered one of Cuba’s most robust coral reefs. It is still out of reach for many tourists, though more travelers and boats are beginning to arrive.

Scientists there will be paired with researchers at the Florida Keys sanctuary, an area that receives more than 3 million visitors each year.

Researchers at Banco de San Antonio and Flower Garden Banks will study their similar deep-water ecosystems and share lessons on a range of issues including protection against oil and gas development. The Banco de San Antonio has an abundant coral reef at the juncture where waters from the Caribbean stream into the Gulf of Mexico. Scientists with NOAA said the reef has a significant influence on the condition of other coral habitats in the Gulf of Mexico and South Florida.

Scientists from the U.S. and across the world are gathering this week in Havana for the 10th Ocean Sciences Conference to discuss climate change and conservation.

“This opens the door to collaborating on many, many fronts so the so-called invisible lines of the Gulf (of Mexico) disappear,” said Daniel Whittle, the EDF’s senior director for Cuba. “In my mind, this was long overdue.”