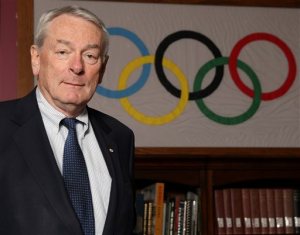 FILE – In this Nov. 1, 2010, file photo, International Olympic Committee (IOC) member Dick Pound poses in the International Center for Olympic Studies after speaking at The University of Western Ontario’s, Western Law speaker series in London, Ontario. The author of the report that detailed anti-doping corruption in Russian believes the country that spent $51 billion on hosting the Sochi Olympics should be able to fix its system in time to get the track team to next year’s Summer Games.. (AP Photo/The Canadian Press, Dave Chidley, File)

COLORADO SPRINGS, Colo. (AP) — The author of the report that detailed anti-doping corruption in Russia believes the country that spent $51 billion on hosting the Sochi Olympics should be able to fix its system in time to get the track team to next year’s Summer Games.

“I don’t think you’ll get the culture fixed in nine months but you can do actions that will come to the same result,” Pound said Tuesday, after addressing the World Anti-Doping Agency’s executive board. “In a sense, I don’t care whether you’re there with clean athletes if the only reason is fear of getting caught, as opposed to thinking that’s the right thing to do. Listen, Russia built Sochi in seven years. This is child’s play.”

Sochi was a mere dot on the map before it landed the right to host the Olympics. Spearheaded by President Vladimir Putin, the country built up the city and hosted last year’s Games.

Pound’s independent commission concluded the government must have known about rampant doping schemes in Russia’s system. The commission recommended decertification of Russia’s anti-doping lab and anti-doping agency (RUSADA). A vote by WADA’s Foundation Board to suspend RUSADA comes Wednesday and Pound said “everyone in the world expects that to happen, and it would be astonishing if it didn’t.”

The question is whether the lab, the anti-doping agency and the track team, provisionally suspended by the sport’s ruling body (IAAF), can all fall into compliance in less than nine months, before the start of next year’s Summer Games in Rio de Janeiro.

Pound said the political powers have to lead the effort.

“They have to say, ‘Look, RUSADA is independent, the lab is independent and anybody who doesn’t make that happen is in trouble,'” Pound said. “Same with the coaches. They say, ‘Folks, the old Soviet system is over. And if that’s your method of coaching, don’t let the door hit your butt on the way out.'”

Pound called Russia’s initial reaction to the report “negative,” but has noticed a change of tone since.

Leaders of the Russian and International Olympic Committees met last weekend to start making a roadmap that would bring the Russian track federation into compliance.

No timelines have been set. On Monday, a group of anti-doping leaders sent WADA a letter asking them to bar Russians from the Olympics, saying less than nine months isn’t enough time to ensure the program is clean.

“We’re not convinced there’s enough time between now and then for them to clean their act up,” said David Kenworthy, the chairman of the Institute of National Anti-Doping Organizations.

Pound didn’t necessarily agree, but said time is of the essence.

“They’ve got to bite the bullet and go full speed ahead to get all this stuff done in time for Rio,” Pound said. “If they start fighting over it, fine, take your time. All the time you want. But, by the way, you’re not going to get to work on your suntan next summer.”