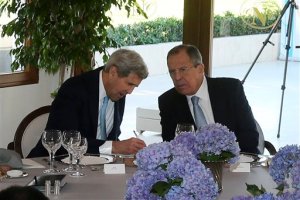 ANTALYA, Turkey (AP) — World leaders vowed a vigorous response to the Islamic State group’s terror spree in Paris as they opened a two-day meeting in Turkey on Sunday, with President Barack Obama calling the violence an “attack on the civilized world” and Russian President Vladimir Putin urging “global efforts” to confront the threat.

But beyond the tough talk and calls for action, there was little indication of how leaders intended to escalate the assault on the extremist group. The attacks in the heart of Europe — combined with earlier incidents in Lebanon and Turkey, as well as the downing of a Russian airliner in Egypt — suggest the Islamic State is reaching beyond its base in Iraq and Syria, an expansion the West has feared.

“The skies have been darkened by the horrific attacks that took place in Paris just a day and a half ago,” Obama said shortly after arriving in Antalya, a seaside resort city just a few hundred miles from the Syrian border. He waved off a question from reporters about whether he would authorize additional action against IS.

Turkish President Recep Tayyip Erdogan, the summit host, pledged leaders would produce a “strong message” about fighting international terrorism, though he, too, did not spell out specific steps.

Putin urged nations to pool their efforts to combat terrorism, adding that the fight must respect international law, the U.N. Charter and each nation’s sovereign rights and interests.

“We understand very well that it’s only possible to deal with the terror threat and help millions of people who lost their homes by combining efforts of the entire global community,” Putin said.

While U.S. officials said Obama viewed the attacks in France as an act of war, they cautioned he had no plans to overhaul his strategy for dismantling the Islamic State group and said he remained staunchly opposed to an American ground war in Syria. Instead, they foreshadowed an expansion of steps the U.S. is already taking, namely airstrikes and train-and-equip missions for rebels inside Syria.

The Paris violence ratcheted up the urgency at the previously scheduled Group of 20 summit, an annual meeting of leading rich and developing nations. At least 129 people were killed in Friday’s coordinated attacks around Paris.

In Turkey, five police officers were injured when a suicide bomber blew himself up during a police raid on a suspected IS hideout near the Syrian border. Turkish security forces also rounded up 20 suspected IS militants in and around Antalya before the summit.

The crisis in Syria was already expected to be on the leaders’ agenda given an uptick in diplomatic maneuvering over ways to wind down Syria’s civil war. The conflict has stretched into its fifth year, left more than 250,000 people dead and 11 million displaced, and created a vacuum for the Islamic State and other extremist groups to thrive.

Foreign ministers gathered in Vienna over the weekend to discuss a new plan to end the war. The proposal appears to be based largely on a Russian initiative and envisions negotiations between embattled Syrian President Bashar Assad’s government and opposition groups starting by Jan. 1.

But hopes for a major breakthrough were softened by open questions about the proposal — such as Assad’s future and the list of opposition groups to be deemed terrorists and barred from participating.

Obama and Putin huddled on the sidelines of the summit for 35 minutes to discuss the proposal, as well as Russia’s military moves in Syria. Putin began launching airstrikes in Syria about a month ago, a campaign he says is aimed at the Islamic State group, but the U.S. views as an effort to strengthen Assad’s grip on power.

Obama appeared to take a softer tone with Putin in their talks. According to a White House readout of the meeting, the U.S. president “noted the importance of Russia’s military efforts” aimed at IS.

Russia is Syria’s biggest benefactor, and Putin’s buy-in is crucial to any political transition. The Russian leader was also scheduled to meet with German Chancellor Angela Merkel late Sunday.

Obama, meanwhile, huddled with Saudi Arabia’s King Salman, another crucial player in the effort to end the Syrian war. The Saudis are staunch opponents of Assad and a major funder of rebel groups in the country.

A more immediate option facing leaders was the possibility of France asking for help from its NATO allies. Only once in its 66-year-history — after 9/11 — has NATO’s communal defense obligation been invoked.

Obama deputy national security adviser Ben Rhodes said it was up to France whether to invoke Article 5 of the NATO charter.

European Union leader Donald Tusk called on G-20 leaders to show “full determination” against terrorism and urged cooperation to prevent terror financing — a step that nations have already been pursuing for more than a year. And United Nations Secretary General Ban Ki-moon said the response should be “robust, but always within the rule of law.”

In addition to the terror threat, this year’s G-20 agenda also included efforts to hasten global economic growth, with a particular focus on addressing the effects of China’s economic slowdown. In a draft of the final G-20 communique obtained by The Associated Press, leaders renewed their goal to grow their collective GDP by another 2 percent by 2018.