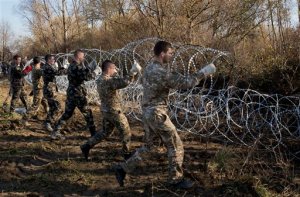 VALLETTA, Malta (AP) — The latest news as hundreds of thousands make their way across Europe in search of safety and a better life. All times local.

A senior Interior Ministry official says Slovenia is “following the configuration of the terrain” in placing a razor-wire fence along the Croatian border to manage an influx of asylum-seekers.

Bostjan Sefic said Thursday the fence is unrelated to the ongoing border dispute between the two countries after breakup of the former Yugoslavia in the 1990s. He insists the border has not been clearly defined.

Croatia has lodged a formal protest with Slovenia, saying the new fence entered its territory at several places along the winding boundary. Croatia has demanded that Slovenia move the fence but Slovenia says it lies on its land.

The two nations have sought help from an international court over the border spat.

German officials say more than 40 migrants have been blocked from boarding ferries to Sweden because of the Scandinavian country’s new border restrictions.

Ulrich Kunze, a spokesman for the city of Rostock, said 43 migrants couldn’t board ferries to the Swedish port of Trelleborg on Thursday because they didn’t have valid IDs.

Ferry operator Stena Line said that it requires all passengers to carry IDs to conform with the Swedish government’s decision to temporarily introduce border checks.

Swedish officials say the border checks aren’t meant to turn away people who want to seek asylum in Sweden, but to make the asylum process more orderly and prevent people from transiting through Sweden to seek asylum in neighboring Finland and Norway.

The prime ministers of Slovenia and Croatia have met on the sidelines of the EU-Africa summit over tensions on the border where Slovenia is erecting a razor-wire fence.

The talks in Valletta, Malta, came as Croatia lodged a formal protest on Thursday insisting Slovenia’s fence has entered its territory.

Slovenian Prime Minister Miro Cerar is quoted by the state STA news agency as telling his Croatian counterpart Zoran Milanovic the barrier is on Slovenian land and has nothing to do with the unresolved border issues left over from the 1990s breakup of the former Yugoslavia.

Slovenia started putting up the fence on Wednesday, saying it needs to better control the influx of asylum seekers. More than 180,000 people have entered the country of 2 million people since mid-October.

Austria’s interior minister says a human trafficking ring suspected of smuggling 1,800 people into Austria since February has been broken up, and 11 of 17 suspects are under arrest.

She said Thursday that those in custody include the suspected head of the ring. Those still at large are being sought under international arrest warrants.

Hungary says it has approved two of the nearly 4,900 asylum requests it has received from refugees since it closed its border with Serbia with a razor-wire fence on Sept. 15.

Janos Lazar, Prime Minister Viktor Orban’s chief of staff, says as of Sunday, 3,592 of 4,848 requests for international protection were still pending, 326 had been rejected and 928 terminated because the asylum-seekers had left the country before a ruling.

Over 391,000 people have entered Hungary this year, though the number has fallen to around a dozen a day since the government also closed its border with Croatia to migrants in mid-October.

Refugees coming up through the Balkans now head toward Slovenia to reach Germany, Sweden and other richer countries in the European Union.

Tiny Slovenia has become the latest in a line of nations putting up barriers against a surge of asylum-seekers seeking to reach Western Europe.

Slovenian police said Thursday they have erected five kilometers (three miles) of the fence in one day despite a border spat with neighboring Croatia. Slovenia insists will not seal off entry but the move shows European countries are increasingly acting on their own.

Hungary’s right-wing government has stopped all migrant traffic through its territory with more than 200 kilometers (120 miles) of fence on its borders with Serbia and Croatia.

Further east, Bulgaria was the first in the region to fence off its border with Turkey. Greece has a short fence with Turkey as well, finding that a river was not enough of a deterrent.

The EU predicts that 3 million more people may try to enter Europe by 2017.

Tusk spoke Thursday at the end of a European-African summit in Malta to find ways to send migrants who don’t qualify for asylum back to their homelands and discourage more from leaving Africa.

Tusk warned: “Without effective control of our external borders, Schengen will not survive.” He added “We must hurry, but without panic.”

The Schengen travel zone involves 30 nations, including some not in the European Union.

Hungary’s prime minister says his country and others from Eastern Europe will send over 300 police and border guards to Greece to help “stop” the flow of migrants.

Viktor Orban, attending a migration summit in Malta, told Hungarian state television that Poland, the Czech Republic and Slovakia — the other countries in the so-called Visegrad Group, or V4 — were also taking part in the initiative set up “in the interests of stopping the refugee wave at the southern borders of Greece.”

He did not clarify what the forces would do in Greece, which almost all the migrants reach by sea in small and often-dangerous boats. There was no comment from authorities in Greece, where a general strike was taking place Thursday.

Orban, who says migration is primarily a threat to Europe, said there is no will in the European Union to stop the migrant flow. He said last week’s ferry strike in Greece which stranded thousands of refugees on islands had been more effective in stopping the migrants than EU leaders.

Slovenian police say more than 180,000 asylum seekers have entered the country since mid-October, with the influx continuing even as the nation starts putting up a razor-wire fence along the border.

Police said Thursday that more than 10,000 people crossed into the country from Croatia on Wednesday and Thursday morning in a sign that refugees have not been deterred by the fence.

The country of 2 million people has repeatedly complained it cannot handle thousands of people coming its way en route to Western Europe. Refugees started crossing into Slovenia after Hungary fenced off its border last month.

The Slovenian army and police on Thursday pressed on with the fence work amid border tensions with Croatia, which says the fence has entered its territory.

Croatia’s foreign minister says she is hopeful Slovenia will move its razor-wire fence from a disputed zone on the border between the two neighboring countries.

Croatia says the fence that Slovenia is putting up to stem the flow of refugees has entered Croatian territory in seven locations. Minister Vesna Pusic said Thursday a formal protest note will be lodged with Slovenia later in the day.

Pusic says Croatia had a similar problem with Hungary when it erected its border fence. “We reacted the same way and Hungary removed the wire,” she said. “We expect the same reaction from Slovenia, they will move it.”

Slovenia has said it is avoiding contested border areas unresolved from the 1990s breakup of Yugoslavia. The small Alpine nation says it is overwhelmed by the refugee surge.

The leaders of Croatia and Slovenia will meet amid border tensions that erupted after Slovenia started building a razor-wire fence inside disputed territory to stem an influx of migrants.

Talks between Slovenian President Borut Pahor and Croatia’s Kolinda Grabar Kitarovic later Thursday are set to focus on the border spat, although the meeting was planned earlier for other issues.

Tensions soared Wednesday as Croatia announced a formal protest note to Slovenia saying sections of the fence are on Croatian territory. The foreign ministry insisted that Slovenia remove the fence.

Slovenia had said it was avoiding contested border areas unresolved from the 1990s breakup of Yugoslavia. The small Alpine nation says it has been overwhelmed by the influx of thousands of people crossing toward Western Europe.

Swedish police are urging people traveling to and from neighboring countries on Thursday to bring their passports or other identification documents as the country temporarily reintroduces border controls.

The move announced by the government late Wednesday means that Sweden is suspending the European Union’s passport-free travel rules, to control the flow of migrants entering the country from Denmark and Germany. The government said the move would “bring order” to Sweden’s reception of migrants and make sure they are registered as they enter the country.

With nearly 200,000 asylum-seekers expected by the end of the year, Sweden is receiving more per capita than any other EU nation.

Germany introduced temporary border controls in September. That hasn’t stemmed the flow of migrants, but German authorities say it’s given them more control of the situation.

Sweden’s prime minister is defending his decision to reintroduce border controls, saying it is no longer possible to properly control the country’s borders.

Stefan Lofven told reporters on Thursday that “when our authorities tell us we cannot guarantee the security and control of our borders, we need to listen.”

Speaking at a migration summit in Malta, Lofven said that his European Union partners understand Sweden’s decision, and that EU leaders need to revamp the rules for Europe’s passport-free area.

He said the EU needs “to discuss what the rules should look like. We need another system. That is obvious.”

Sweden currently has the highest number of migrants per capita of any EU country, as the bloc struggles to manage its biggest refugee emergency in decades.