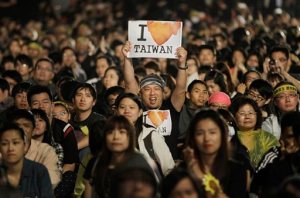 File- In this March 30, 2014 file photo, a protester displays a banner supporting Taiwan during a massive protest against China in front of the Presidential Building in Taipei, Taiwan. Taiwan struggles with its identity as it retains its official name Republic of China, along with a constitution that defines its territory as encompassing all of mainland China. But as far as communist China is concerned, Taiwan is part of its territory, and insists that the two sides eventually reunite. (AP Photo/Wally Santana, File)

BEIJING (AP) — It has no membership in the United Nations. In the Olympics, it competes as “Chinese Taipei.” Most nations don’t recognize it as a country.

The economically dynamic, self-governing island of Taiwan has struggled with diplomatic isolation and a conflicted identity that makes it not quite a sovereign nation — although many Taiwanese insist it is.

It has de facto independence from mainland China, but has never formalized that, so it technically still vies with the mainland to be the “real China.”

Taiwan retains its official name “Republic of China,” along with a constitution that defines its territory as encompassing all of mainland China. But as far as Communist China is concerned, Taiwan is part of its territory, and it insists that the two sides eventually reunite.

Those contradictions underpin the island’s politics, rising again to the fore with the announcement of talks between the Chinese and Taiwanese presidents this weekend in Singapore — the first since the two sides split in 1949 after China’s civil war.

Taiwan’s complicated identity comes from a tumultuous recent history and, of course, politics.

A former Japanese colony, Taiwan — historically called Formosa, a name given by Portuguese sailors — was handed to the Republic of China under the terms of Japan’s World War II surrender in 1945. But when Mao Zedong’s Communists won China’s civil war in 1949, Chiang Kai-shek’s defeated Nationalists moved their government wholesale to the island.

Decades of political repression followed as the island grew increasingly diplomatically isolated, finally losing its U.N. Security Council seat to the ascendant People’s Republic of China in 1971. The U.S. then severed ties in 1979, but by the late 1980s the pro-independence democratic opposition began making electoral gains against the Nationalist hardliners who clung to the unification goal.

That culminated in the first direct presidential election in 1996, accompanied by Chinese attempts to intimidate voters with missile firings that were ultimately counterproductive. The pro-independence Democratic Progressive Party took the presidency in 2000 for eight years before a Nationalist resurgence put Ma Ying-jeou in power.

The past decade has seen China moderate its words and actions toward Taiwan in hopes of boosting the unification camp, including enforcing an unofficial diplomatic truce so as not to strip Taiwan of its 22 remaining diplomatic allies. That arrangement could go by the boards should Beijing conclude that tougher measures are needed, leaving Taiwan more of an international orphan state than ever.