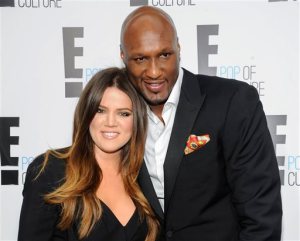 FILE – In this April 30, 2012, file photo, Khloe Kardashian Odom and NBA basketball star Lamar Odom attend an E! Network upfront event at Gotham Hall in New York. (AP Photo/Evan Agostini, File)  Editorial Note: The Spartan Echo changed the Associated Press caption above which referenced Lamar Odom as a star of the “Keeping Up With the Kardashians” television show, not as an NBA great.  Kind of proves the point of our article, doesn’t it?

An editorial by Danee’ Allred

“We’re all products of our environment. The key is not to fall,” Lamar Odom said.

Amid the attention and fame that went along with his life in the Kardashian family, it’s easy to overlook what was a successful basketball career for Lamar Odom.

To help balance out his career in a supportive way, he married celebrity Khloe Kardashian in 2009. He has made several appearances on her family’s reality television show, “Keeping up with the Kardashians.” Those appearances have misled some about Lamar Odom’s career and fame.

A lot of media does not acknowledge Lamar Odom for his basketball name, but for the woman he married.

If anything, Lamar Odom has brought more fame into the Kardashian household than it deserves. Even though it’s a game, basketball is more important than a spoiled, rich family’s life drama.

Media fails to recognize Lamar Odom’s history in basketball. They overlook all of his accomplishments, but focus on the bad that he does or, even more, flaunts that the Kardashians have made him relevant.

That’s wrong. He’s so much more than just Khloe’s husband.