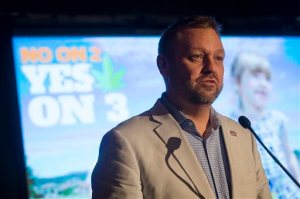 Ian James, executive director of ResponsibleOhio, a pro-marijuana legalization group, speaks to the crowd at an election night event at the Le Meridien hotel, Tuesday, Nov. 3, 2015, in Columbus, Ohio. Voters have rejected a ballot measure that would have made Ohio the first state to make marijuana legal for both recreational and medical use in a single stroke. (AP Photo/John Minchillo)

COLUMBUS, Ohio (AP) — Ohio voters rejected a ballot proposal Tuesday that would have legalized both recreational and medical marijuana in a single stroke — a vote-getting strategy that was being watched as a potential test case for the nation.

Failure of the proposed state constitutional amendment followed an expensive campaign, a legal fight over its ballot wording, an investigation into petition signatures — and, predominantly, a counter campaign against a network of 10 exclusive growing sites it would have created. It was the only marijuana legalization question on the 2015 statewide ballots.

About 65 percent of voters opposed the measure, compared to 35 percent in favor.

Issue 3 would have allowed adults 21 and older to use, purchase or grow certain amounts of marijuana and allowed others to use it as medicine. The growing facilities were to be controlled by private investors, leading opponents to label it a “marijuana monopoly.”

That featured heavily in opposition campaigns and a separate ballot question to prevent monopolies from being inserted into Ohio’s constitution for the economic benefits of a few.

Campaign director Ian James assured supporters at a downtown Columbus gathering that the fight was not over, calling Tuesday’s defeat “a bump in the road.”

“We need to not only address compassionate care for the chronically ill, we need to also remain vigilant in protecting direct democracy,” he said. “Because when the Statehouse refuses to deal with the voters, the voters have to make them deal to make sure that their voices are heard.”

After his remarks, the anti-monopoly measure passed.

Ethan Nadelmann, founder and director of the Drug Policy Alliance, the nation’s leading drug policy reform organization, said defeat of the pot proposal is “relatively insignificant” because of its unconventional call for “a constitutionally mandated oligopoly over an agricultural product.”

“This Ohio vote has been sort of a side-show that no one else was either worried about or excited about elsewhere in the country,” he said.

Two older voters in downtown Cincinnati who said they support legalization of marijuana both said they voted against Issue 3 because they didn’t like the “monopoly” element creating exclusive growing sites.

“I can’t believe I voted ‘no’ when it was finally on the ballot,” said Marty Dvorchak, 62, of the northern Cincinnati suburb of Fairfield. “I think it’s ridiculous that marijuana is illegal. The war on drugs has been a failure. But I don’t think 10 people (growers) should have a monopoly.”

Colorado, Washington, Oregon and Alaska, along with the District of Columbia, have legalized recreational marijuana. Medical marijuana is now legal in about half of states.

“At a time when too many families are being torn apart by drug abuse, Ohioans said no to easy access to drugs and instead chose a path that helps strengthen our families and communities,” he said in a statement.

The pro-legalization ResponsibleOhio campaign included several famous faces, including boy band star Nick Lachey and basketball great Oscar Robertson. The campaign had spent $12 million as of its most recent campaign filing and reported raising about the same amount.

“Issue 3 was nothing more and nothing less than a business plan to seize control of the recreational marijuana market in Ohio,” Curt Steiner, director of Ohioans Against Marijuana Monopolies, said in election night remarks. “Issue 3 was designed and built primarily to garner massive and exclusive profits for a small group of self-selected wealthy investors.”

AP writers Dan Sewell in Cincinnati and Ann Sanner in Columbus contributed to this report.