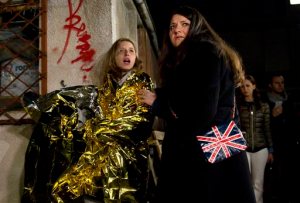 A survivor of a fire that occurred in a club in Bucharest, is led away from the scene wrapped in a thermal blanket early Saturday, Oct. 31, 2015. A heavy metal band’s pyrotechnical show sparked a deadly fire Friday at a Bucharest nightclub, killing more than 20 people and injuring scores of the club’s mostly youthful patrons, officials and witnesses said. (AP Photo/Vadim Ghirda)

Interior Minister Gabriel Oprea initially said an explosion occurred at Colectiv club, located in a basement in a building in downtown Bucharest, a city of 3 million people, but authorities heading the rescue effort later said there had been a fire and no explosion.

Witnesses told Antena 3 TV that there were between 300 to 400 mostly young people at the club, housed in a former factory, and only one exit door when the metal band Goodbye to Gravity was performing and a pyrotechnical show went awry. The station reported that people panicked and rushed for the exit.

Media reported that clubgoers initially thought the flames were part of the show and did not immediately react. Fire regulations can be lax in Bucharest clubs and restaurants.

An Associated Press photographer at the scene saw people wandering around outside the club clad in emergency blankets in an apparent state of confusion.

Upon hearing the news, people descended on the club looking for loved ones. Adding to their anxiety was the fact that many of the clubgoers were not carrying identity papers so victims could not immediately be identified.

“She’s not answering the telephone and she’s not saying anything,” said a mother, dressed in a black leather jacket, crying in front of television cameras.

“We want information whether he’s alive,” said a visibly overcome woman, speaking about a family member.

Victor Ionescu, who was at the club with his girlfriend, told Antena 3 TV that “people were fainting, they were fainting from the smoke. It was total chaos, people were trampling on each other.”

A young man filmed by Antena 3 said that flames engulfed clubgoers, burning their skin and hair.

Several major nightclub fires have been blamed on pyrotechnics igniting foam used for soundproofing, including The Station nightclub fire in the U.S. that killed 100 people in West Warwick, Rhode Island, in 2003 and the Kiss nightclub fire in Brazil, which killed 242 people in the university town of Santa Maria in 2013.

Raed Arafat, a government emergency situation official, said that people were treated for burns, smoke inhalation and lesions at hospitals around the capital. Twenty-five were reported in serious condition at the Municipal Hospital.

Manager of the Ophthalmological Hospital, Monica Pop, said the hospital had treated teens aged 14 to 16 for injuries.

Oprea called an emergency government meeting for Saturday morning to discuss the situation.

According to the Bucharest-based metal band’s Facebook page, lead singer Andrei Gault was the 2008 winner of “Megastar,” a Romanian show similar to “American Idol.” The band has five members and has released two albums since it formed in 2011.

President Klaus Iohannis wrote on his Facebook page that he was “shaken and deeply hurt by the tragic event. … It is a very sad moment for us all, for our nation and for me personally.” He said he was considering declaring a day of national mourning.

Prime Minister Victor Ponta, on a visit to Mexico, said he was cutting short his visit to return to Bucharest.

The ministry said there were 60 ambulances and fire engines were sent to the scene and a mobile hospital had been set up outside. About 180 people were injured, with some 50 of them taken to the Floreasca emergency hospital, the ministry said.

This story corrects that Raed Arafat is an emergency situations official, not a health ministry official

Vadim Ghirda in Bucharest contributed to this report.