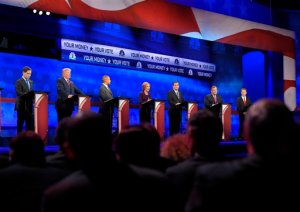 Last night’s third Republican debate, sponsored by CNBC, proved that the GOP presidential candidates were ready for war and a few candidates took no prisoners.   From Florida Senator Marco Rubio’s rebuttal in regards to Former Florida Governor Jeb Bush, to Mike Huckabee’s comments in regards to Donald Trump’s “moral authority,” the overall tone of the debate was filled with some candidates shifting their previous stances and letting their true voices be heard.

After Gov. Jeb Bush decided to make remarks regarding Sen. Rubio’s absences in the U.S. Senate, and addressing various groups that are calling for Rubio to resign from his seat, Rubio went blow for blow with the former governor. Gov. Bush exclaimed that “Marco, when you signed up for this, this was a six-year term, you should be showing up to work.”

Marco Rubio has been said to have the worst voting record in the senate; the senator has missed an averaged 12.3 percent of his roll call votes from Jan 2011 to Oct 2015 according to the GovTrack website. Sen. Rubio, who was an avid supporter of Gov. Bush while he was the State House Speaker, took a jab at Gov. Bush by saying that the governor’s campaign is modeled by Senator John McCain’s 2008 presidential candidacy. Despite the obvious scolding by Gov. Bush in regards to the senator, Rubio asserted himself by touching on the governor’s numbers at the polls and the not-so-subtle implication that Bush is a loser for copying a presidential campaign loser; thus, making Rubio the obvious winner of their quarrel.

Another candidate, Mike Huckabee, was roused into a question regarding Donald Trump’s morality, a question that gave the sense of a brewing battle between the two. In the question from moderator John Harwood, the former Arkansas governor and ordained minister was asked if he believed if Trump had the “moral authority” to lead the nation. Instead of berating the businessman, Huckabee noted that he was wearing a Trump tie, compliments of Donald Trump’s clothing line, and that “Trump would be a better president every day of the week, and twice on Sundays, than Hillary Clinton.”

Senator Ted Cruz also had some standout moments at the debate. Cruz’s blistering jabs at the media included telling the CNBC moderators that their questions were the reasons American citizens do not trust the media.

Governor Chris Christie also made statements regarding the questions asked by the moderators. The New Jersey governor exclaimed “Fantasy football? ISIS and AL Qaeda are attacking us and we’re talking about Fantasy Football?”

The front-runners Donald Trump and Dr. Ben Carson had little to say and were not the focal point of the debate. Trump, who attempted to pump fake CNBC moderator Becky Quick about his stance on Mike Zuckerburg’s immigration plan by saying he didn’t make the comments, was then proved wrong by CNN’s Anderson Cooper on his nightly segment where they sourced the comments to Trump’s own website. Many felt that the fact checking of the moderators was off, but on this incident, Becky Quick was deemed correct. While Trump’s numbers remain high in the polls, his campaign is starting to show signs of a slump in support as Dr. Carson has taken the lead in Iowa according to recent polling.