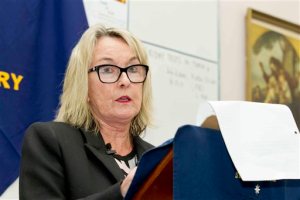 June Steenkamp, the mother of the late Reeva Steenkamp who was shot dead by her boyfriend Oscar Pistorius in 2013, delivers a lecture on women abuse to students at Saint Dominic’s school in Port Elizabeth, South Africa, Wednesday, Oct. 21, 2015, where Reeve attended. Pistorius was released from prison into house arrest Monday Oct. 19, 2015, after serving one year out of five for the culpable homicide death of Reeva Steenkamp in Feb. 2013. (AP Photo/Michael Sheehan)

SOMERSET WEST, South Africa (AP) — The mother of Oscar Pistorius’ slain girlfriend on Wednesday delivered the speech her daughter wrote and had planned to give at a South African school on the day she was killed by the Olympic athlete.

June Steenkamp went back to Reeva Steenkamp’s old high school in their home town of Port Elizabeth to talk to students, and read directly from the speech that touched on domestic abuse, family relationships, and even Reeva Steenkamp’s struggles to break into the modeling industry because she wasn’t very tall.

“I will now carry on where she left off,” June Steenkamp told students before reading excerpts of the speech her daughter had prepared for a visit to a Johannesburg school on Valentine’s Day 2013.

Instead, Reeva Steenkamp, a 29-year-old law graduate and model, was fatally shot by Pistorius in the pre-dawn hours of that day.

Responding to students’ questions, June Steenkamp spoke of the double-amputee runner, who was released from jail Monday to go under house arrest.

“I’ve got no feelings of revenge,” she said. “I don’t want to hurt him, he is already a disabled person. I did not want him to be thrown into jail and suffering because I don’t wish suffering on anyone and that’s not going to bring Reeva back.

“But in my heart, I don’t want revenge towards him. I am past that.”

Pistorius, the world-famous runner and multiple Paralympic champion, was acquitted of murder for Steenkamp’s shooting death and instead found guilty of the lesser charge of culpable homicide — an unintentional but still unlawful killing comparable to manslaughter.

He was sentenced to five years in prison and was released this week to go under house arrest after serving a year in jail, in line with South African law.

Steenkamp’s family have previously said they do not think the sentence was stern enough. Pistorius, 28, could be sent back to prison for a minimum of 15 years if prosecutors still seeking a murder conviction against him succeed in an appeal to South Africa’s Supreme Court next month.

June Steenkamp made Wednesday’s speech to launch a foundation named after her daughter that aims to help women and children who are victims of domestic abuse.

Wearing a black jacket, June Steenkamp said the hurt of losing her daughter “never goes away,” but she smiled briefly as she repeated the words Reeva wrote for the planned Valentine’s Day talk to youngsters more than two years ago:

“I hope that you all had an amazing Valentine’s Day and you were spoiled with love and roses and chocolates,” June Steenkamp said, reading out her daughter’s words. “Go home and tell your parents, your siblings and your neighbors that they are appreciated and you will go to bed with a happy heart and an open mind for the future.”