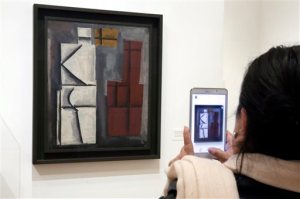 “Untitled,” one of the works of artist Joaquin Torres-Garcia, is displayed during a preview of a retrospective of his work, at the Museum of Modern Art, in New York, Tuesday, Oct. 20, 2015. (AP Photo/Richard Drew)

NEW YORK (AP) — The Museum of Modern Art will feature a retrospective on a central figure in the history of modernism in the Americas.

The exhibition is titled “Joaquin (wah-KEEN’) Torres-Garcia: The Arcadian Modern.” It surveys the Uruguayan artist’s work through some 190 paintings, sculptures, frescos, drawings and collages done during the first half of the 20th century.

The New York City museum said it’s the first major U.S. retrospective on the artist in 45 years. The last one was at the Guggenheim in 1970.

Curator Luis Perez-Oramas said Tuesday that the exhibit emphasizes two key periods. From 1923 to 1933, Torres-Garcia experimented with early-modern avant-garde movements in Europe. From 1935 to 1943 he produced one of the biggest repertoires of abstraction done in the Americas.