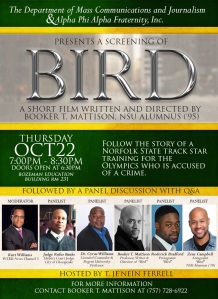 The Department of Mass Communications and Journalism and Alpha Phi Alpha Fraternity Inc. present a screening of the short film “Bird,” written and directed by NSU alumnus Booker T. Mattison (’95) on Thursday, October 22, 2015 at 7 pm in Bozeman Education Building, Room 231.

The Department of Mass Communications and Journalism and Alpha Phi Alpha Fraternity Inc. will present a screening of the short film “Bird,” written and directed by NSU alumnus Booker T. Mattison (’95) on Thursday, Oct. 22 at 7 p.m. in Bozeman Education Building, Room 231.  Following the film will be a panel discussion on wrongful imprisonment.

“Bird” is the story of a Norfolk State track star training for the Olympics who is accused of a crime.  Much of the film was shot on the Norfolk State University campus last May.  The panel will be moderated by Kurt Williams from WTKR News Channel 3 and hosted by Professor Je’Nein Ferrell.  The panel will consist of Judge Rufus Banks, District Court Judge for the City of Chesapeake; Dr. Cyrus Williams, licensed counselor and professor at Regent University; and Mattison.  The panel will also feature Roderick Bradford and Zeus Campell, an NSU alumnus (’10), who star in the film.

Mattison is an author and filmmaker who wrote the screenplay for and directed the film adaptation of Zora Neale Hurston’s classic story “The Gilded Six Bits.” He received his Master of Fine Arts in film and television from the Tisch School of the Arts at New York University and his Bachelor of Science in mass communication from Norfolk State University.

If you can’t make it to the film and discussion, you can participate live on Periscope and follow the conversation on Twitter at @NSUMCJR.  Be sure to download the Periscope app to your mobile phone or watch from your computer at http://www.periscope.tv/nsumcjr. You’ll be able to submit questions and exchange your thoughts with others.