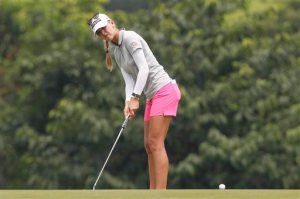 Jessica Korda of the United States watches her putt on the ninth green during the third round of the LPGA Malaysia golf tournament at Kuala Lumpur Golf and Country Club in Kuala Lumpur, Malaysia, Saturday, Oct. 10, 2015. (AP Photo/Joshua Paul)

Korda missed a birdie chance on the par-4 18th when her 6-footer slid by on the left side, leaving the 22-year-old American at 12-under 201 at Kuala Lumpur Golf and Country Club. Fellow American Stacy Lewis and South Korea’s Ha Na Jang were tied for second.

“These last two days have been the hottest days I think I’ve ever played golf in,” Korda said. “You feel it, you really do. Luckily, there was not a lot of sun out there today, but the humidity was really, really high.”

Korda has only one top-10 finish this season, a tie for second in January in Florida in the season-opening event. The three-time LPGA Tour winner is 50th in the world ranking and 56th on the money list, barely enough to get a spot in the tournament.

“It’s been such a long time and I’m so happy,” Korda said. “I’m very pleased to be back on top of the leaderboard. I definitely wasn’t expecting all my hard work to be paying off this quickly, first week out in the Asia swing, but I’ll take it wherever I can.”

The third-ranked Lewis has rebounded with rounds of 66 and 65 after opening with a 72.

“This golf course is just a shootout,” Lewis said. “It’s just who is going to make the most birdies at the end of the week. … But you can’t go on this golf course and try to make birdies. The moment you try to make a birdie you’re short-sided in the bunker.”

“I haven’t been there in a while,” Lewis said. “It’s been a little bit of a frustrating year. It’s nice to be back. Hopefully, I can put another good one together tomorrow.”

Second-ranked Lydia Ko was three strokes back at 9 under along with defending champion Shanshan Feng and Xi Yu Lin.

Playing alongside Korda, Ko bogeyed the 18th for 68. The 18-year-old New Zealander is coming off consecutive victories in the Canadian Pacific Women’s Open and Evian Championship, where she became the youngest major champion.

“Obviously, a little disappointed to finish up with a bogey, but I don’t feel that bad,” Ko said. “I felt I holed some really good putts that maybe didn’t even deserve to go in.”

Feng had a 69, and Chinese compatriot Lin shot 71.

Top-ranked Inbee Park, the 2012 winner, was 8 under after a 71. The South Korean star won two of the five majors this year and is tied with Ko for the tour victory lead with four.

Morgan Pressel had a 63, the best round of the week, to get to 6 under. U.S. Solheim Cup teammate Michelle Wie also was 6 under after a 69.

The event is the first of five straight in Asia. The LPGA KEB Hana Bank Championship is next week in South Korea, followed by stops in Taiwan, China and Japan.